Don’t Let’s Go To the Dogs Tonight: An African Childhood 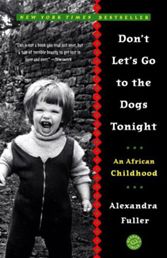 While growing up in the late 1970s, Alexandra Fuller followed her parents from farm to farm over some of the hardest bits of Africa, the kind that can’t seem to keep a name or government long enough for a book to make it to the publishers. If this happened in today’s America, Fuller would be in tears on a talk show or providing a therapist’s daily bread.

Even though the British flags have come down, imperial British toughness and humor have not faded. And the oft-mocked belief that all of it — the good, the bad, the beautiful and the brutal — will do you good is real. It certainly made Fuller a writer, the kind whose clear-eyed view and visceral attachment to the land she was born in sucks the reader in and leaves him as exhilarated and avid for more as one of the rough and dangerous rides across Africa with her indomitable parents in the driver’s seat.