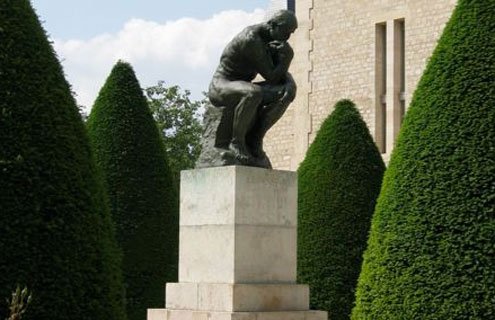 The Musée Rodin gardens are perfect for an aimless Sunday walk. Photos by Ingrid K. Williams.
A

s far as romantic weekend get-aways go, Paris is such an obvious destination that it’s become a cliché. But the cliché works. No Roman passeggiata is as dreamy as a late evening stroll through the Tuilleries. No Tuscan picnic feels as amorous as a spread of Beaujolais, baguettes and Brie beneath the Eiffel Tower. No Venetian canal feels as romantic as the Pont Neuf at dusk.

Earlier this summer, my husband and I went to Paris to celebrate our wedding anniversary. It wasn’t our first time in the city, so rather than running along the tourist trail from one museum to another, we had planned a more casual weekend of shopping, eating and spending time with friends. Romance was of course also on the agenda, but first we had to eat lunch.

During our previous trip several months earlier, we had eaten lunch at Au Vieux Comptoir, a delightful brasserie in the first arrondissement. Soon after we had placed our orders with the waitress, a woman seated at a nearby table was served the most fantastic looking steak. What I had ordered turned out to be decidedly less luscious, but I decided that the steak would’ve been one of the most delicious things in the world.

So on this trip, as soon as we’d settled into our hotel, I insisted on returning to that charming corner brasserie for a late lunch, even though we had plans to meet friends for dinner just a few hours later. When we got there, I was relieved to find that nothing had changed. Rows of small wooden tables were topped with sparkling wine glasses and wicker breadbaskets, chalkboard menus still hung on the walls, and the sun was streaming through the bright yellow awnings, flooding the dining room with a golden glow.

When the steak of my dreams finally arrived, the plate looked as good as I had remembered. Melted butter glistened atop a fluffy pile of mashed potatoes, and when my knife pierced the steak’s charred crust, aromatic juices escaped from the dark pink, perfectly rare flesh within. I dragged a piece of chewy baguette across my plate, sopping up the melted butter and juice. This time, I knew, I had ordered correctly.

When the last of the red wine had been drunk, we wandered slowly along the Seine back toward our hotel, eventually turning north past the Louvre and through the Tuilleries. It was time for dessert.

Though the afternoon air had become humid and filled with the noise of a jackhammer on a nearby street, once we stepped into Pierre Hermé, we were transported to a completely different world. An air-conditioned jewel box, the store was cool and serene with rows of chocolates and colorful macaroons (macarons) meticulously arranged behind spotless glass counters. Clad all in black, the salesgirl carefully described the edible masterpieces in reverential detail. We chose a small box, which she quickly filled with a fantastical variety of macaroons: mustard-colored salted caramel, olive-hued olive oil and vanilla, pink rose with rose petal crème, creamy grapefruit filled with wasabi cream, and plum-colored cassis.

Back in our hotel room, my husband and I carefully considered our favorites and easily agreed that some of the whimsical combinations looked better than they tasted. But not the pale pink confection that seemed to be dusted with gold, which was called Arabesque. Sandwiched between the pistachio macaroon biscuits were a heavenly apricot crème and a hidden pistachio praline. And it was perfection.

With sweets spread out across the hotel duvet, I wished — as I often do — that such delicious morsels could be found back home in Italy. For all the Italian boasting about having the world’s best cuisine, the country largely overlooks sweets and desserts.

My long-held theory is that after cooking a huge dinner, Italians simply don’t have the energy to whip up an iced cake or a batch of cookies. And no matter what my neighbors might say, the desserts for sale at the pasticceria are not up to snuff. Not after a weekend in Paris, where every patisserie offers glistening fruit tarts, flaky chocolate-filled croissants and rows and rows of candy-colored macaroons. No, Italians might be content with a cup of sorbetto and a few sips of grappa, but not me. Not after Paris.

After sampling the best Parisian sweets, it was time to do some Parisian shopping. We had tramped through the elegant department stores on our last visit, but since this was a special occasion, a very special purchase was planned.

Gift-giving is tricky business. Most people like to give gifts that they think the recipient would want, based on their own personal preferences. In all honesty, I am often one of those people. But I am fortunate to have a husband who is not. Which is why, to purchase a belated birthday present, he took me to Chanel.

Inside the heavy glass doors was a white-carpeted dreamscape where well-coiffed women spent exorbitant amounts of money on exquisite things. There, a polite salesman placed the most beautiful handbag in my hands, and for 15 minutes I stroked the buttery-soft black leather and twirled in front of a mirror.

I had held this bag before, many times, in many different Chanel boutiques. But this time, on Rue Cambon, when I handed the bag back to the salesman, he didn’t place it back up on a shelf. Instead, he carefully wrapped it up in a box, tied it with a satin bow and placed it in a white tote bag with the iconic black block lettering printed on the side.

For the rest of the day, I walked around with a dopey grin on my face and the perfect bag on my shoulder. In a joyous, dizzying blur, the bag and I dined with my husband and two friends, rode around Paris listening to ridiculous French folk music, drank champagne in a rooftop apartment with a view of the glittering Eiffel Tower, and wandered back to our hotel just as the sky began to lighten at dawn.

Since the following day was a Sunday, my husband and I woke up late and went to brunch. As a former New Yorker, I love brunch. My husband always swore that he hated brunch, but I think that he had just never experienced a good brunch. I hate bad brunch too. But like New York, Paris does good brunch.

Sometime after noon, we settled into a window table at Le Fumoir, a handsome café and bar behind the Louvre that feels like a smoking lounge without the smoke. As we watched passersby on the street, a basket of buttery scones, sweet yeast rolls, crusty baguettes with marmalade and jam, and fresh-squeezed orange juice arrived at our table.

Returning to my theory about why Italians don’t have a high regard for sweets, I should also mention that in my experience, this apathy also extends to breakfast. The morning after a heavy meal, perhaps Italians simply aren’t hungry for breakfast. Why else would such a discerning population stand for the underwhelming, stale cornetti that accompany their morning espressos?

But in Paris, breakfast is more than a basket of croissants. Soon, my husband and I were happily devouring fluffy, moist scrambled eggs topped with basil and herbs, which were followed by small plates with blueberry pancakes in syrup. This was a proper brunch and would easily sate our appetites through the rest of the afternoon. Afterward, we lingered over tea and watched the world pass by the window. Eventually, though, we headed out for a lazy stroll, or flâneur, as Baudelaire would say.

Across the Seine, behind the walls of the Musée Rodin, there are beautiful gardens, perfect for aimless ambling on a lazy Sunday afternoon. Studded with some of the sculptor’s most famous works, the quiet gardens are a shady sanctuary filled with leafy alleys, gravel paths and rows of perfumed rosebushes. There, we contentedly spent a couple of hours smelling the roses — literally — and contemplating “The Thinker.”

On our last night in Paris, we embraced the cliché, shopped for a simple picnic and headed to the Eiffel Tower about an hour before dusk. Of course we were not the only ones with this idea. A Parisian friend suggested the Parc du Champ de Mars, which is where we claimed a patch of grass and laid out our spread. As the night wore on, the sky slowly darkened from the day’s pale blue into the deep indigo of night, the horizon blushing all the while.

Finally, at 10 o’clock, the Tower began the twinkling light show that we, and several hundred others, were waiting to see. Across the lawn, people cheered and cameras flashed as if it were a sporting event. After one minute of mesmerizing, sparkling light, the glittering spectacle stopped as suddenly as it had started. The spell had been broken. The Tower was again just an ordinary golden tower standing before us, so we packed our things to go.

As we walked to the edge of the park, we turned back for a final glimpse. Against the navy sky, the glowing tower still cast a romantic glow. Yes, of course it’s a cliché — but it’s Paris, it works.

Paris is easily reached from all major (and most minor) airports in Italy. Low-cost carriers, including easyJet, Meridiana, Windjet, Air Berlin, transavia and myair, all fly to one of Paris’s two main airports. Charles de Gaulle airport is located 25 kilometers north of Paris, and Paris Orly airport is 15 kilometers south of the city. Less conveniently, Ryanair has nearly two dozen routes between Italian cities and Beauvais airport, which is located 85 kilometers outside of Paris.

When you get tired of walking, the metro is an efficient, though less scenic, way to get around the city. A single ticket costs €1.60, but a carnet, or book, of 10 tickets costs €11.60. Tickets are valid for two hours.