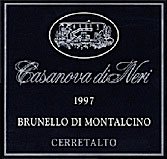 s interest in Italian food increases in popularity, I wasn’t surprised to learn that Wine Spectator magazine recently put Casanova di Neri’s Brunello di Montalcino 2001 Tenuta Nuova DOCG atop their annual list of the world’s best wines. What that means for the already-popular Brunello market is higher prices. Brunellos will probably jump from the €35 per bottle range for new releases to a base price of €45-to-€55 or higher in the domestic market, which is quite high by Italian standards.

Giacomo Neri, the producer of the Tenuta Nuova, went against the grain to make the winning wine. It’s a surprisingly dark Brunello, suffused with intense berry extract that adds to its great perfume. Born from two relatively young vineyards, Pietradonice and Le Cetine, Tenuta Nuova stands out from brethren Brunellos because it’s not a victim of “overoaking,” the frequently-used technique that favors immediate strong flavors over those that linger after swallowing.

I respect Neri for not pandering to North Americans who tend to mistakenly equate strong oak accents with quality and high dollar value. As a result, they miss out on the uniquely individual tastes found in relatively young vines of high tannin varietals such as Tuscany’s Sangiovese. (For wine neophytes, tannins are responsible for a red wine’s structure and backbone. While they can be very astringent in young wines, over time they help the wines develop a fuller, more defined character.)

Neri chooses to let the wine ferment on the “lees” much longer than usual. Lees are the goopy, gummy, sediment that gives red wine its color. Depending on the producer, it may consist of grape pulp, skins, but always the yeast that settles in the bottom of the fermentation tank or barrel. These dregs are called “mud” in the United States or “sur lies” (on the lees) in French and can add complexity and richness to a wine.

Neri’s choice makes my mouth happy and gives his wine a significantly darker color than normally found in the Brunello tradition. The result is a full ripe cherry fruit flavor that is slightly more concentrated than the norm. It’s a wine full of tart tannin acidity and verve and is likely to join its Tuscan neighbor, Biondi Santi, as a benchmark for fine reds.

But while Tuscany again basks in the red wine limelight, I don’t want to leave out Lazio. For me, the Lazio region is the Alberto Sordi of Italian wines. Lazio wines are perceived as heavy-handed, complete with thick Roman accents that only the locals seem to understand. Most foreigners dismiss them as lightweights: faithful and sturdy or just comically mischievous. They’re often remembered solely for “pourability,” which suggests wine that takes strong second place to the food, evoking terracotta pitchers and plates piled high with cacio e pepe or carbonara.

Young, irreverent, and lacking in the longevity (and high price) of wines destined for venerable cellars, the underdog Rome-area wines are overlooked even by Romans, who lavish fickle attention on “chic for the moment” neighbors in Sicily — led by Nero D’Avola.

But Lazio also has chic wines and I hope the Sordi factor — considering Lazio wines nothing but a good time — will diminish. It has every reason to. Lazio has its own heavy-hitter enologists, including Riccardo Cotarella. Cotarella, born in Monterubiaglio near Orvieto, is famous for his pioneering fermentation techniques in the region. My advice: look for good Lazio wines now. Enjoy them and smile ear-to-ear: they are gems at your disposal that have yet to garner media attention.

I recommend these two from Cotarella’s Falesco vineyards:

2003 Falesco Pomele. Made of 100 percent Aleatico, this is a fantastic red dessert wine made from an indigenous Lazio variety with a wildly perfumed scent. Aleatico has a distinct aroma not unlike a Muscat and is perfect for dessert wines. The 2003 Pomele is succulent and lively, with distinct mirtillo scents and tastes though others sometimes think of roses. For me it goes perfectly with chocolate fondente, or anything dark and decadent.

2001 Falesco Montiano IGT. This is 100 percent Merlot that is full-bodied, ripe, and delicious, with layers of currant and black cherry. The vintage has silky tannins and rich flavors that reflect not only the grape, but also the soil and the creativity of the winemaker. It’s delicious now, but also well worth keeping for another three to five years.