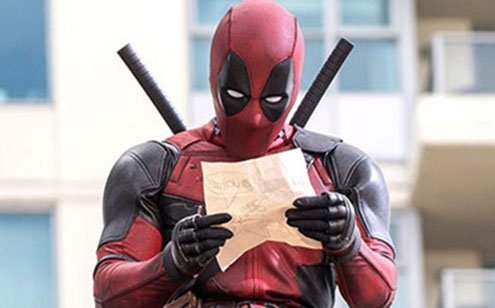 elcome to a insider joke-laden superhero satire that works overtime to remind you it doesn’t take itself remotely seriously. Too hard, in fact. Wade Wilson (Ryan Reynolds) is a spider-mask cloaked mercenary with a foul mouth and skills that border on the silly. He counts his bullets aloud to make you aware he knows most superheroes never seem to run out of them.

Our good guy Wade underwent a weird procedure to cure his cancer. Not only did it not work but it also left him disfigured. So it is he’s become a vigilante avenger prowling the mean streets of New York City looking for action, aka Dead Pool (“Captain Deadpool! No, just Deadpool.”) Never mind that he has Liam Neeson nightmares

His feisty girlfriend Vanessa (Morena Baccarin) is an ex-escort (what’s more empowering than that?) His best friend is Weasel (T.J. Wilson), the kind of bromantic best friend who remarks, “You look like Freddy Krueger face-fucked a topographical map of Utah.” Sweet! Wade’s genetically engineered archenemies (aside from his friends) are his maker Ajax (Ed Skrein) and Angel Dust (Gina Carano), who both hail from the lab that left cancer-ridden Wade unhinged.

Special effects-driven director Tim Miller has all but vomited out an unapologetic spoof on an X-Men/Marvel movie that uses heavy doses of irony and porn-rich vulgarity to mock an over-the-top underdog who in turn can’t stop mocking himself. Our dear Deadpool never ever fails to poke fun at his “status,” no matter how obvious the gag (Deadpool to audience, as Angel Dust performs an outrageous leap: “Superhero landing! She’s going to do a superhero landing!”)

If you’re a Marvel addict, marvelous, this’ll work. If you’re not and in search of less blunt-edged caricatures, the mutant mockery onslaught can seem short on something. That something might actually be humor. Not fuck-shit-bathroom humor grossness, which exists in abundance (“Whose kitty litter did I just shit in?”), but the wry kind. Not the kind, for example, that finds too-cute amusement in telling you, dear viewer, that the movie’s over (“You’re still here? It’s over. Go home! Oh, you’re expecting a teaser for Deadpool 2. Well, we don’t have that kind of money.”)

Sure, Deadpool and Ajax have gruesome confrontations, and what’s a spoof without a character called Negasonic Teenage Warhead. (“Fuck, you’re old,” she tells our hero after he makes a reference to the movie “Alien.”) Bottom line, devil-may-care Deadpool is a social media age anti-Wolverine charmer endowed with unspeakably nifty shaming skills: “If I ever decide to become a crime-fighting shit swizzler, who rooms with a bunch of other little whiners at Neverland Mansion with some creepy, old, bald, Heaven’s Gate-looking motherfucker… on that day, I’ll send your shiny, happy ass a friend request.” You want to tell him, “Please don’t.”