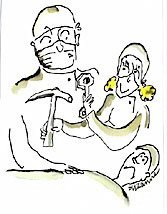 Is that fistula convex or complex?
I

limped into the light blue hospital in Sorrento in late June with painful, rotten apples in my upper right hamstring. This was the first time I had ever gone to a hospital without sporting flowers and a “get well soon” card. I had never needed to before — I’m young, 25, and relatively healthy. It was a new experience for me. I actually brought a camera.

The doctor told me that I had an ascesso. I looked to my girlfriend, Carmen, for a translation, but found none. The doctor patted me on the back and rattled off dialect before disappearing behind the curtain. I again looked to Carmen.

“He says he hopes it explodes,” she said. He hopes what explodes?

“The ascesso. If not, they’ll have to cut it out. He said it could get pretty painful.”

No kidding. The week after the visit was terrible. I could barely walk. Sitting became a fantasy, sleeping a chore.

And I still didn’t know what ascesso meant. I looked it up. Abscess. No help.

The therapy from the doctor: Take pills for a couple weeks and sit in the bidet with hot water and salt until it goes away. The swelling reduced and the pain dulled, but the bumps were still there. But I could walk and sit and do all the other essentials, so it was cool with me.

Then came late August. After a trip to Croatia, the abscess struck again, with a vengeance. When Carmen and I got back to Sorrento we went straight to the hospital with thoughts of minor surgery. Their beds full, they directed us to the town of Vico Equense.

In Vico we met a doctor who spoke English, which provided an immense relief. After examining me he said, “You have a complex fistula. We have to operate. I will be available on the 17th. Don’t worry! You will be able to live a normal life.”

Time to call the parents.

Since they had been left in the dark, their reaction was inevitable: hysteria. Then, finally, “What do you want to do?” I didn’t know.

There were two options: Do it in Italy, or do it in the States.

My father said stay. My mother told me to come home. My girlfriend didn’t want me to leave. Americans I asked said they’d prefer to get cut in the States. After all, everything — insurance, care, treatment, and recovery — was supposed to be not only better, but also easier there.

So we booked the flight.

But when I arrived in Chapel Hill, North Carolina, expectations of a speedy and easy recovery vanished within seemingly endless visits to doctors and specialists. With each new theory of what was wrong — a complex fistula, an abscess, a cyst, an infected ingrown hair — my optimism waned. The theories of why the whatever-it-was had developed ranged from stress, to folliculitis, to Crohn’s disease. All had different therapies. No one could say when I’d improve.

We decided to take a non-surgical, holistic approach. Daily shots of Echinacea followed by hot baths with Epsom salts and hourly remedies of mysterious liquids became my crutches. But they weren’t enough. The abscess swelled again in early November and showed signs of exploding.

Taking this as a sign that the abscess was ready to drain, we had it lanced. A thumb-sized cavity was left in its wake. With the help of a daily sitz, or sitting baths, the open wound was supposed to heal from the inside out.

But after a month, nothing had happened.

We went to the University of North Carolina in mid-December for a second opinion. They said we needed to be packing the wound with gauze every day. So, everyday for two weeks, I went to have the gauze packed by an amiable nurse named Harry.

This packing has recently become my responsibility.

Every time I slide the gauze-draped wooden Q-tip into my wound, I think of the words of the English-speaking doctor in Vico Equense. With shabby curtains covering the observation areas, dull fluorescent bulbs buzzing above, and chipped white paint dusting the floor below, the blond doctor told me that it would be an easy operation, that for three weeks afterwards I would have a small tube hanging from the wound for draining purposes, but then I would be able to live a normal life. In a word, I would be cured.

After four months in the country where everything is supposed to be easier, more advanced, and just plain better, I don’t think this is what he had in mind.

— Editor’s note: Matt Fiorentino has since made a complete recovery.