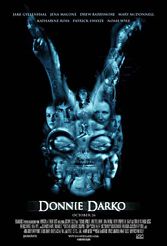 American filmmakers have a love-hate relationship with the apocalypse. They can peddle horror and conflagration until real-world bad guys mimic their big bangs, but the vision thing isn’t cool. Omens and foretelling, “Twilight Zone” and “X-Files” territory, usually get visual punctuation marks. It’s the absence of such punctuation that makes Richard Kelly’s creepy first outing so memorable. Is this a great movie? Probably not. Even its cult following doesn’t bill it as “Citizen Kane.” What they do see is a hypnotic flight of fancy that works like a dark charm.

In 80s jargon, Donnie is a “special boy.” He’s brilliant, troubled, in therapy, and resistant to medication. He also has visions and hears things go bump in the night. Kelly opens with one of those bumps and closes with an adjusted version of the same.

When Donnie wakes up to a voice telling him the world is 28 days from a sinister fate, he seeks the source. That’s exactly when a commercial jet engine falls from the sky and demolishes his bedroom and part of the house. The offending jet, of course, can’t be found, a tip-off on Kelly’s agenda. The engine scene was considered so alarming that the movie’s September 14, 2001 release date was pushed back two months. Donnie’s end-of-the-world confidant turns out to be a toothy bunny rabbit that speaks through a voice box and looks like a steam-powered Halloween costume.

Kelly keeps the silliness in check by giving Donnie a very credible life. At school, he’s mocked for having dodged death. He meets a girl, Gretchen (Jena Malone), who finds him weirdly attractive. Kelly then assembles his omens as if beading a bracelet. Donnie’s English teacher, Karen Pomeroy (Drew Barrymore), is in trouble for assigning a Graham Greene story about anarchism. The school’s mascot is vandalized by an ax. A self-help coach (nice cameo by Patrick Swayze) is foisted on students only to be exposed as a fraud. An unexplained flood empties the school. Meanwhile, Donnie busies himself in probing time travel (a reclusive former teacher wrote a book about it) and continues getting rabbit alerts on the countdown. The weather forecast on the 28th day is described as “apocalyptic.”

Kelly lingers on two themes. The first is how mental illness and shaman status overlap — in essence a secular investigation into the nature of visions. The second is the way the ultimate non-conformity is thinking you can control time. What more absurd time-warp spokesman than an anthropomorphic bunny with a doomsday agenda? In the end, Jake Gyllenhall’s Donnie is a unwitting male witch reworking his life on borrowed time.

The soundtrack (“Tears for Fears,” “Echo and the Bunnymen” — had to be…) kicks life back into the 80s. Here’s a gifted young director waving a menacing wand over American suburbia.