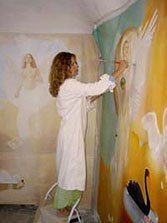 Donna Sheratan at work in Positano.

Visionary artist Donna Sheratan could say the idea to move to Italy just hit her one day, literally. Sitting in her tiny but sunny Positano studio she recalls how a book tumbled from a New York City bookshelf and struck her head. The subject of the book was Michelangelo. She thought of it as a sign.

Sheratan headed to Rome in March 2002, and lived briefly in Venice and Tuscany. Last February, she settled in Positano. But her life’s history is far less straightforward than Italian dates and places. In fact, little about the saga of this 42-year-old native New Yorker is simple or easy.

Sheratan began painting angels after she barely survived a Caribbean storm in 1992. These are not quaint bedroom-lamp angels but striking and luminous apparitions that come to her in visions. They are startling in size and color, and Sheratan sometimes requires a step-ladder to paint them. Her story landed her on the cover of People magazine in December 1997 and brought about appearances on America’s Larry King Show, CNN, Extra, Joan Rivers, and The Roseanne Show. Singer Liza Minnelli and guitarist Carlos Santana are among the celebrities that own her works.

In a cover story written soon after Sheratan began her work with angels, Time magazine noted what it called “the new age of angels,” saying “69 percent of Americans believe they exist.” Sheratan says she may have thought of angels, but only as a child. Describing herself as a spiritual but practical youth, she knows how far-fetched it now sounds to tell skeptical outsiders that angels direct your life. At first, Sheratan was reluctant to tell anyone about her visions. “I said, ‘I’m not going to be committed to Bellevue.’ It was quite a number of years before I felt comfortable being public about what I was experiencing.”

She explains, carefully, how the angels communicate with her. During meditation she thinks of a question and works on it over a one- to two-week period. Eventually, “a vision” appears in answer to the question. She compares it to a movie image. “I don’t hear angels talking to me like I’m a crazy person,” she laughs. “”But I see a scene like you would watch a scene in a movie and then I interpret what the scene is.”

Sheratan began contemplating a move abroad after Sept. 11, when Americans grew nervous about the purchase of luxury items and the sale her paintings dropped off. Then came the unusual succession of events that included the book incident. There was more: A meditation scene about spending time in Italy, a potential client offering her a free airline ticket because she’d heard Sheratan was considering moving, and an unexpected call from a director at a Malibu substance abuse rehabilitation center asking her for paintings, which meant she wouldn’t have to store them if she left. “I’m a little bit skeptical myself. I’ve been having this experience with angels for many years, but I’m a New Yorker and New Yorkers are black and white. I was like, ‘OK, the book fell on my head. The angels said to go.’”

Sheratan is a self-taught artist who first made a name for herself painting nudes, which once fetched between $10,000 and $30,000. She had vacationed in Milan and Como years ago, but sensed a need to visit Rome and Florence to study the masters and revive herself. “I feel like this is where I belong because I’m very connected to the old painters and really appreciate that kind of beauty and perfection,” says Sheratan. Her move to Italy has also helped her develop a stronger palette and a richer, more varied sense of color.

Sheratan made her first museum visit at age four, and stood mesmerized before Goya’s painting “Don Manuel Osorio.” She claims she heard a voice that she took as God’s, instructing her to devote her life to painting. After that, she shunned her peers, toys, and sought only art supplies. “I said, God gave me this gift of painting and that’s what I’m going to do with my life. I could almost paint and draw then the way I do now. It was my blessing because I had such a bad childhood… I said, ‘God gave me this gift and my parents cannot take it away from me.’”

Since youth, Sheritan has suffered from a variety of kidney ailments. Her father underwent two kidney transplants, went blind as a result, and died before age 50 of kidney failure. Sheratan’s own physical pain debilitated her at times, and medication only brought more problems. After a particularly bad stretch she feared that she’d end up like her father and resigned herself to a premature death, saying, “I’m going to go peacefully.”

Ironically, it was her search for peace, this time at sea, that nearly killed her. In 1992, she, her wealthy husband, and a crew set sail from Palm Beach to the Bahamas on the couple’s 30-meter motor yacht. But a storm overtook the vessel and lashed it incessantly for 15 hours. The ordeal scarred her, even when the craft finally docked in Florida. “I prayed, ‘Please God, you have to relieve me from this pain. I can’t suffer from this pain anymore,’” she says of her emotions after the storm. When she finally fell asleep she fell into revery. She recalls seeing a bright light and feeling very peaceful. Then, what she calls angels, or silhouettes of light, circled her. She noticed that she too was white and felt herself descending, seeing blue sky and her boat. “I saw myself lying down and thinking for the first time that I was dead. My lips were blue. I was chalk white… I didn’t want to get in my body. My soul just hovered about my physical body and didn’t get in. This angel appeared and said, not with words but telepathically in my mind, ‘You have work to do on earth and it will reveal itself to you over time. You must go back. Your mission is not complete.’”

The angel left and Sheratan sobbed. Her physical pain was gone but she told no one of the vision, not even her husband. Her next painting featured an angel. As she began painting more angels, most in idyllic poses and guises, her husband grew impatient and angry. He ultimately left her. Galleries that sold her nudes were less thrilled with the angels. Sheratan responded by ignoring the skeptics. “I started to feel like I was given a second chance at life and I want to paint what I saw on the other side,” she says. “I want to get people in touch with the peace and tranquility that I felt. All I wanted to do was bring this peace and tranquility to the earth. I felt this was my mission and I’m going to start over.”

Her oil-on-canvas paintings run from $5,000 to $30,000. Each is the result of a vision she has under meditation or while sleeping. She says the angelic energy flows through her to make a painting that has its own essence and purpose. Some clients even ask her to paint angels on order. Her larger pieces, which are two meters by two-and-a-half meters, usually take about seven months to complete. A Positano exhibit of her work drew about 500 people last year and a Rome showng begins in December (see box).

“Donna hasn’t had an easy life and it’s amazing how she can produce these beautiful things,” says friend Connie Santillo. “I don’t know how she goes on.” Santillo keeps a small, penciled sketch of one of Sheratan’s angels in the bedroom of her family home in Benevento. “Every time I look at it, it makes me feel so happy and so serene,” Santillo says. “Her paintings are so very comforting and very spiritual.”

Sheratan still battles poor health but says the angel paintings have given her the chance to assist others, a lifetime ambition. “The angels combine both the creative desire to express and my desire to help people,” she says. “I feel much more fulfilled.”