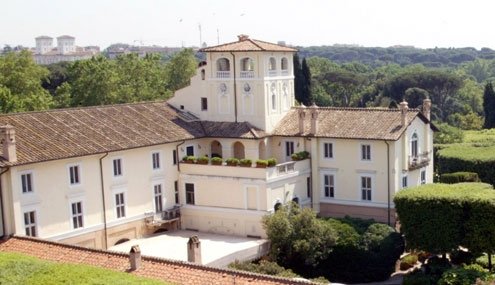 A steeple where a tent-top once was.
A

permanent gazebo is going up at the American Embassy residence in Rome next door and I’m a witness to its creation. Crouching, bowlegged workers shove shy slats of glass into black girders to make a steeple where a tent-top once was. It’s a Prussian helmet with a Dolby soundtrack.

Global warming is a hipper subject. So is the Ozone Layer’s potential to serve up Baked Alaska, a cross between an exotic dancer and cocktail. Melting glaciers are easier to fret over than the daily spark-and-grind of acetylene torches and drills.

But the drilling gets into my skull.

Noise is terrorism disguised as a good deed by enlightenment hustlers. But what if al-Qaeda built for years on end? What if heathen carpenters and wicked welders went 24/7, whole populations dulled by toxic whine? What if drills came without “off” switches? Laurence Olivier gave Dustin Hoffman the treatment in “Marathon Man” — but who could have imagined a drill’s closet lusts?

Please understand: A gazebo is a delightful thing. Even cute. I’m sure the next ambassador will enjoy it, the he or she of luxury’s glassed-in treat (along with the existing tennis court, pool, movie theater, wine cellar and fashion runaway). The workers certainly take it seriously. They begin at 8 a.m. and don’t stop until 4 (there’s lunch, of course). Occasionally they drill on weekends, which means they’re either drugged or desperate for Green Cards.

One mid-afternoon the vibrations set off a local apartment alarm. A pixie girl among a posse of school kids playing in the dead-end alley outside the residence went crazy when the drilling went on for two hours straight. “Basta,” she screamed. She wailed three times in all, Mad-as-Hell-style. But the diligent dentists ignored her. They were just following orders.

I’m reminded of U.S. Gen. James Dozier, who was kidnapped by the Red Brigades in Verona in 1981. They tied him up, taped on headphones, and forced him to listen to Italian ballads for a month. Once freed, he maintained a stupid grin. After which he retired and died. Imagine being forced to hear “Donna Canone” 5,000 times.

But I’m minority, I know. What’s more delightful than being iPod-enabled? Volume is the post-existential self’s designer aplomb. Citizens are 1950s aliens, tuning forks who can’t speak for all their geared-up listening. Speech offends the ear canal’s non-verbal adrenalin, drills, Bach and Death Cab for Cutie sucking at the same membrane and elbowing one another for space.

From time to time I see myself strutting to the residence’s front gate and announcing myself as a petition-bearing president of the Italian chapter of the International Migraine Guild. But complex’s castle guard recently enlisted Alpine soldiers cradling automatic weapons who seem bored enough to rescind questions with gunfire. They have literal feathers in their caps.

At the same time I feel for them: Un-iPodded, they can do nothing but pace back-and-forth as the gas company saws hard into the pavement’s already-wounded molars a half-block away.

That’s another neat Rome trick, chewing and filling holes, the city as a dog. The last street work in my neighborhood lasted eight weeks, jackhammers, cranes, stalled ambulances wailing, all the tools of a noise plot. The senses gradually submit to their own desecration. (The noise terrorists win.)

Oh, and a day after the gas company finished up — the construction Big Top folded and the equipment rolled back — an uncapped valve (scusi!) brought the circus troupe frolicking back. The dogs of infinite sound re-burrowed for more.

Rome is loud. Cities are loud. Urban testosterone, particularly in the Latin world, peddles thump, thud and whine as eager forms of liberalism, rock’n’roll for the 21st century. Aside from text messages and sex, beating up on the surface of things is life’s gift to motor functions.

This probably accounts for the latest twist in sexual vernacular. For years, men “got some,” “did it,” “made it” or “scored.”