Don of the fishes 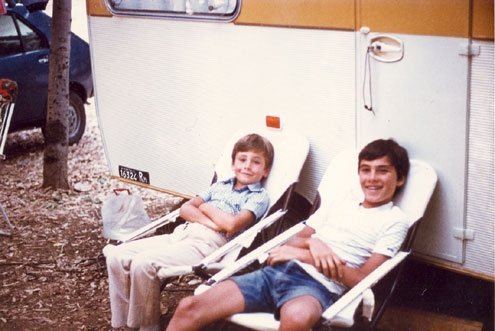 gentle sea breeze ruffled the blinds. In those days, I slept in the same room as my brother Danilo. But sleep was nowhere to be found that night. I was too busy with my private countdown. We were going camping.

It was July 1978, and I was five. I recall my parents wide-eyed in front of the TV. We were living through the so-called “Years of Lead.” Urban terrorism had a stranglehold on the daily news. In March, a Red Brigades commando team had kidnapped former prime minister and Christian Democratic Party President Aldo Moro in Rome. The guerrillas executed him after a two-month captivity and dumped his body in a car parked in the city’s centro storico. The country was in shock.

But the news wasn’t all bad, at least not for a five-year-old. Thanks to a work bonus, my father had bought a trailer. On a friend’s advice, he decided to take the family on a summer vacation to the San Fantino campground near the town of Palmi in Reggio Calabria.

My father decided to make the trip in July to avoid the worst of the summer heat, which in August was known to melt the asphalt on the southward-bound autostrada del sole.

We’d leave Rome at 6 a.m. to take advantage of the early morning cool. In those days, car air conditioning was a rarity, mostly something out of American movies. Before we left, I followed my mother to the supermarket where she picked up goods for the trip. I had to know everything, and all I did was ask questions. “Mom, why are you buying this? Mom, why are you getting that? Dad, what’s this for?”

My Dad equipped our car (a blue Fiat 125, now a legend) with a bolt to connect it to the cream-colored Lander Graziella 401 trailer. We drove 700 kilometers in 11 hours, stopping only six times. The campsite was run entirely by a Calabrian family, and they set us up in a place under the shade of a large eucalyptus tree.

Once there, my brother began grinning. I sensed mischief in the offing. Instead, he pulled a green Canadian tent out of his bag. My parents had decided they wanted their privacy. They’d sleep in the trailer. I’d be stuck in the tent with Danilo. My heart sank. I knew Danilo would have a field day with me, literally. But I was still happy. At least it would be a new experience.

The campsite overlooked Calabria’s so-called “Violet Coast” and its translucent sea. In the distance were the Straits of Messina, the Aeolian Islands, and Capo Vaticano. Every morning we got up early and walked along a stairway that ran from the campground promontory beside cactus and Indian figs to the sea. The water was as blue as a swimming pool, and I spent all day snorkeling. No one could get me out. When they did, my hands and lips were purple.

From our stretch of beach, we could key on three points, all about eight kilometers away; to the south lay “olive rock,” where an olive tree had amazingly grown up from the shoals; in the middle was “giant” rock, which had a 30-meter-high cliff; and toward the north a dock. We’d roam among the three, but I grew fond of “olive rock.” I’d clamber up and dive back in, hunting and spearing octopus. Midway through each morning a small, thin elderly woman dressed in black, her faced baked by the sun, appeared with a cart full of fresh fish. “Anchovies and squid,” she’d cry in Calabrese dialect, her daughter beside her. People emerged from under umbrellas and swarmed the cart, the old woman disappearing from view.

Over the years, my father had taught himself to snare medium-sized fish such as mullet using a cast net. A circular net with weights stitched on its edges, a cast net is fixed to a line and tossed into the water in a corkscrew, hammer-throw motion. Fish get caught in the net as it’s hauled back in.

One day someone in the campground told my father about a fish-rich canal. When local fisherman saw my father using his cast net, which looked to them a little like an upside down umbrella, their jaws dropped. They’d never seen anything like it. Suddenly, news of a man from Rome fishing with a “umbrella net” made local rounds, particularly after he snagged 40 kilos of fish in one session. The campground broke into song.

Once, after he’d been out fishing, my father returned to the car to find the windows broken and his driver’s license gone. I could sense something going through his head, but I didn’t know what. Though plenty of people watched and admired my Dad’s techniques, an old geezer always appeared on the beach with three alarming-looking “assistants.” One of them would set up the old man’s umbrella; another light up his cigarettes, while the third and youngest came and went, kissing the elder statesman’s big gold ring that contained a red stone. Every so often, the youth squatted down and whispered into the old man’s ear. The old man was called “Don Vincenzo” and whenever he got to the beach everyone made room, bowing and kissing. Don Vincenzo often looked in my direction, and I’d smile back at him.

The day of the car incident my father was extremely gracious with Don Vincenzo. He even gave him the fishing net. I didn’t understand why. They murmured to each other, but I couldn’t hear them. A little later, one of Don Vincenzo’s assistants “found” my father’s driver’s license and returned it to him.

From that day on, whenever I went to the beach campground bar, everyone called me by name. Sometimes they’d even offer me and my brother Coke and candy. Something had changed.

Clean the onions and cut them into thin slices. Lightly fry the slices in a large saucepan with 3 tablespoons extra virgin olive oil (ensure the pan is large enough to include the pasta at the end).

When the onions become transparent, add the diced meat and lightly sautéed for a few minutes. Add the wine and let the mixture dry a bit.

After a few minute, add the tomato.

Cook the sauce until the tomato thickens and then add salt and pepper to taste. After the pasta is cooked and drained, place it in the saucepan, adding the pecorino, the Parmesan and some thyme leaves.

Prepare a marinade in the bowl by mixing olive oil with lemon juice, adding plenty of oregano, parsley, chopped garlic, salt and pepper.

Add chopped capers and a little grated lemon rind. Season the swordfish with a little olive oil and grill the fish.

After cooking, sprinkle the fish with the marinade and serve warm.

A white Cirò goes well with both dishes.