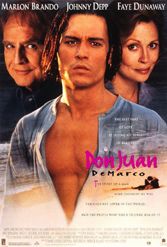 A lovelorn man in a Zorro outfit is saved from a suicide leap off a billboard in Queens and is promptly handed over to a bored therapist. Mitigating circumstances: Zorro thinks he’s really lady-killer Don Juan and is played by Johnny Depp; the bored therapist is… Marlon Brando; the therapist’s wife is Faye Dunaway. While Brando and Dunaway are icons on display, Depp’s Don Juan walks the walk. He believes in own legend and has a bedtime storybook full of romantic adventures to tell the good doctor.

The tales let director Jeremy Levin (a psychotherapist by training) push the movie out of the hospital. But it’s the wildly gifted (impressive and impressionable) Depp who embodies the central question: can schizophrenia convince itself it doesn’t exist? And if it succeeds, does it fool disbelief? Levin deserves a nod for getting Depp and Brando (one of kind in all he did) mixed up in the uplifting fun.