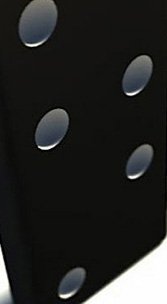 A scare tactic, he explained. Vietnam goes, then Thailand, Japan, even Australia.

It was Halloween. He slammed his fist on the table.

I believed without understanding.

So asked Petie, who was busy taking apart a bug with tweezers. “I’m operating,” he said. (He wanted to build a “tri-bug,” he said. I didn’t understand that, either.)

What’s the Domino Effect? I asked

He sighed. How could I not know about the Domino Effect? Everyone knew that.

You don’t know anything, said Petie. “You’re as bad as these,” and he shook his bug jar, a collection of unfortunate beetles he’d collected (alive) from the alley.

Petie put on his, “You’re dumb” face, which consisted mostly of wagging his tongue from side to side while squinting.

“Ok, so the Domino Effect is when places don’t have sugar.”

“No,” said Petie, “that’s what the Communists want you to think. Then… then, they starve you!”

I tried to imagine sugarless Vietnam, with Japan next.

I wasn’t his brightest pupil.

The Communists in Vietnam were hoarding the world’s sugar supply. They had to be stopped orit could happen.

It didn’t sound plausible, but I did begin thinking about a world without sugar. I wouldn’t have taffy or sour cherry gum.

“There you go,” Petie cried. Finally! That was the Domino Effect.

With Communists coveting sugar it wouldn’t be long before they got around to corn candy and cows and birds and even, well, bikes. Pretty soon, they’d control everything. Even pets.

The Domino Effect would produce a “consternation,” which was like a big bomb, only carried by dogs. Petie paused. He wasn’t sure where to go next. The dogs excited him too much.

So, I said, attempting to sum up what I knew so far, the Domino Effect was… Communists in Vietnam trying to make sure Japan and Australia had no sugar by threatening them with dog bombs?

No wonder my father had brought up on Halloween.

Why exactly LBJ wouldn’t just come out and talk about the sugar I didn’t know.

Nor did I understand much about nationalism, which Petie said had to do with lots of rain and thunder all at once.

I did make it a point to check the kitchen several times a day, protecting the sugar cubes.

When my father asked why, I just smiled.

In the end — and this is important — the Vietnamese never did take anyone else’s sugar. Maybe they ran out of dog bombs. Or maybe we just lost interest.

Extremists, says today’s president, are establishing a radical empire from Spain to Indonesia.

My father would probably object. Another Domino Theory.

“A radical empire,” he’d say, “is like a tri-bug, but with really big wings.”

And Indonesia is, well, a kind of… pillow.

First, the extremists (or the president) make you sleepy and then, well… you know the rest.