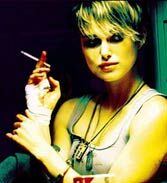 In the early 1990s, Domino Harvey, the rebellious twenty-something daughter of British actor Laurence Harvey, added a new page to the catalogue of bad-girl self-indulgence: Instead trading decadence with the movie and modeling crowd she became an bounty hunter.

Thrill-seeking director Tony Scott knew her at the time, which apparently led him to embark on this action-homage biopic that exploits Keira Knightly (Domino) for her sexuality and Mickey Rourke (her mentor Ed Moseby) for his endearingly grizzly looks. The “story,” such as it is, is little more than compilation of snarling jump-cuts with lots of Knightley close-ups — she smokes what seems like the same cigarette for 90 minutes.

Christopher Walken is tossed in as a reality-show producer and Delroy Lindo does his hearty tough guy number. Though the undertaking soaks up a little less blood than Scott’s “Man on Fire,” it gets nowhere in telling you why a bitchy little rich girl would actually pick this life less traveled.

The real Domino, a frequent drug rehab visitor, OD’d in a West Hollywood bathtub in 2005, the year the movie was released. She faced federal charges of possessing and distributing methamphetamines at the time of her death. So much for glamour.