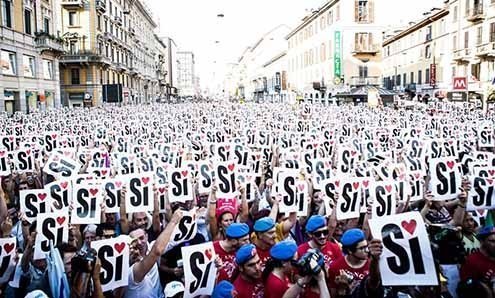 Protesting in favor of civil unions was one thing, but the actual process, now legal, is anything but easy.
H

ollywood stars are renowned for their many marriages. Elizabeth Taylor was married eight times to seven different men. But those who believe in their marriages sometimes go the other way, renewing their vows as a way of telling their partner, “I’d do it all again.”

For a variety of reasons, many same sex couples still don’t have the opportunity marry even once — though same sex unions and marriage are increasingly acquiring legal status in the West.

The recent passage of civil union legislation in Italy meant Alberto and I could finally get “civil unioned.” Though we’d already been married for 10 years in Canada (a wedding that included a church service), Italy still refused to recognize it. Making matters worse, our Canadian marriage made us ineligible for an Italian civil union.

What we could do was register our marriage as a civil union. But even that involved paperwork.

First, we had to request our official Canadian government marriage record (our license wasn’t enough). Once we got it, we had to send it back to Canada for an official translation. The translation was then certified by the Italian High Commission in Toronto and returned to us in Milan. Of course all this cost hundreds of dollars. Ouch!

We then made an appointment at Milan city hall where we submitted the documents and registered as a civil union. Were we done? No. A couple must decide whether it wants joint or separate assets, and inheritance. Since the Canadian marriage certificate didn’t cover this, we had to register our financial intentions with a notary. Did I hear “ouch!” again?

A very kind woman at city hall promised to rush it all through for us. “Come back in a week,” she told us. And we did.

Our civil union “rite” didn’t included flowers and fancy clothes. It didn’t even come with a cake or confetti. But we did go across the street for a coffee and brownies at the California Bakery.

In all, we’ve been together for 19 years, lived together for 16, been married for 11, and registered as famiglia anagrafica (a “census” family) for five.

Finally, though, we’re “unioned.” What did it take? Thousands of dollars in legal and bureaucratic fees, hundreds of hours of waiting in line, and compiling endless documents — a process that sometimes felt like climbing the Tower of Babel.

I remember a 1980s ad promoting diamond anniversary rings. Show her you’d do it all again, went the tag line. Even though diamond rings weren’t involved, we did just that.