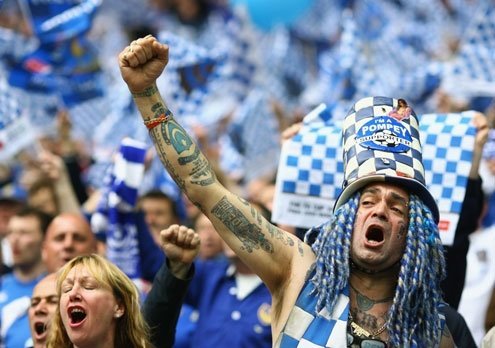 In 2009, by winning the FA Cup, Portsmouth fans had a lot to cheer about. But then things changed.
F

ive years ago, Portsmouth Football Club was celebrating winning the FA Cup and an impressive eighth place finish in the Barclays Premier League.

But that glorious summer afternoon at Wembley would mark the dawn of a new era of serious financial malaise and chronic instability both on and off the pitch.

After five different ownerships, three relegations and a total of 29 points deducted as punishment for their two periods in administration, the historic club looked consigned to liquidation.

Its 115 years of existence seemed numbered, unless it could find a buyer — and fast.

The only ray of hope was that provided by the Pompey Supporters Trust, a group of fans who decided to club together and invite all other supporters to make pledges of £1,000 in order to buy a share in what would become the largest fully community-owned club in the United Kingdom.

On April 10, 2013, the Trust was confirmed as the new owners after agreeing an out-of-court settlement for purchasing the stadium, Fratton Park, from former owner Balhram Chainrai.

Finally, after months of staring down the barrel, the club’s long-suffering fans have something to cheer about.

When the Pompey Trust formed in December 2009, supporters promised they would convert their pledges if the Trust succeeded in their purchase of the club.

They have stayed true to their word, raising approximately £2.5 million since the High Court verdict in April, with further funds anticipated during the summer months, not least from the sale of season tickets, for which there has already been an increase of approximately 50 percent compared to last year.

Things are looking brighter on the pitch as well. After going into administration for a second time and undergoing the resulting transfer embargo, Portsmouth manager Guy Whittingham has had little option but to blood a host of youth players into the first team.

The five players who made the grade have impressed, with fullback Adam Webster since being capped by England at under-19 level, while Jed Wallace’s four goals in 17 games from midfield have seen him linked with a return to a higher division.

Despite reportedly boasting several suitors, Portsmouth’s new chief executive Mark Catlin has asserted that Wallace will not be allowed to leave the club on the cheap. With the club now essentially debt-free (any money still owed to creditors is covered by parachute payments the club received from the Premier League following relegation in 2010), Portsmouth no longer needs to sell players to balance the books. How times have changed since last year’s enforced exodus of the club’s entire first team.

With the takeover coming towards the end of the recently concluded season, Portsmouth has a full summer to prepare properly for the new campaign: a luxury it hasn’t enjoyed for some years.

The club’s newly-formed marketing department has already overseen several commercial initiatives that seek to give supporters the best possible value for money. A deal with new kit sponsor, Sondico Professional, has ensured that adult fans will be able to purchase a replica shirt for the new season for £34.99 and children for £19.99, the lowest prices in England’s top four divisions.

Meanwhile, the club’s new season ticket structure is designed to attract as many children and young people as possible to matches (season tickets for under-17s are £70, while under-11s can attend games free of charge). The aim is to build a legacy of fans that will be committed to Portsmouth for years to come.

As the old saying goes, too many cooks can spoil the broth. How can so many individual fans run a club successfully?

Just like at any other club, there is a board of directors, which will make all the key decisions. The difference lies in the board members’ election by the fan shareholders in what is a more democratic ownership model than that of most other football clubs, apart from smaller teams such as Exeter City and AFC Wimbledon.

What differentiates Portsmouth’s fan-ownership model from that of these smaller clubs is its hybrid nature. While individual fans own around 60 percent of total shares, the other 40 percent are owned by a group of high net worth individuals, who have earned greater powers for their vast contributions to the club, typically in excess of £50,000 per person.

That Portsmouth was able to tap into funds from wealthier supporters has been crucial to the Trust’s successful takeover of the club. This hybrid structure bears a strong resemblance with that of many clubs in Germany’s Bundesliga, where fans must own at least 50 percent of all shares.

Last year, I wrote about the need for football clubs to follow the German system in order to spread the otherwise colossal risk of only having a majority shareholder. Thankfully, there are signs that the business model is likely to grow in popularity, as an increasing number of clubs enter trouble. Coventry City and Bury FC, both of whom are encountering financial difficulties, have already approached the Pompey Supporters Trust for advice. Meanwhile, supporter groups at Manchester United and Newcastle are also reported to be looking into the viability of adopting a model akin to Portsmouth’s for when their respective owners depart.

In recent years, the word Portsmouth has become synonymous with how not to run a football club. Indeed, the financial woes are never likely to be forgotten.

The signs are, however, that Portsmouth fans are determined to have their club remembered for very opposite reasons and even provide a sensible, positive blueprint for several other clubs regarding their governance in the future.

After all they have achieved so far, who would back against them? In years to come, who knows what it might mean “to do a Portsmouth”?