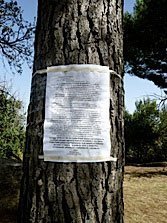 here’s a plot of grass near my house that could be pretty but isn’t. The grass needs watering, dirty plastic containers collect under the bushes, and the benches are broken. If you walked by, you’d pause and mutter, “Too bad.”

That was my first reaction to the grounds around my latest apartment. A few weeks later, I returned so that Bella could make her back yard debut. Dry and dirty, the yard seemed like the ideal place for a dog. After walking a few meters on the crackly grass, Bella paused. A large orange cat had emerged from behind a large rock. Bella struck a pose, bared her cute, teeny teeth, and claimed turf. Two black cats (one with a collar, one without) also appeared as a yet another cat, this one salmon-colored, played look-out from afar. Bella pulled me back to the street in a well-thought retreat. This was not a dog day afternoon.

We returned armed with Mini, a five-year old cat-expert. We had plastic bags and some prosciutto. Mini placed strips of prosciutto in heart shapes around the overturned water bowls that I originally thought were trash. She threw leaves in the air and, her magic complete, announced that the cats would come. The orange cat crept out (this time from the trees) accompanied by a man and a Boxer. Cat and dog walked around us territorially, sniffing our legs and yawning at Bella’s growls. They were the ambassadors of this plot. The man, Giancarlo, introduced himself, along with as Sara (the Boxer) and Semola (the orange cat). Black Cat With Collar, aka “Nerone,” slinked out from under a bush.

I suddenly realized we were surrounded by Bella’s worst nightmare, a colonia felina. To paraphrase the Comune di Roma’s Ufficio Diritti Animali, it’s a feline preserve — a colony of sorts — where two or more cats live can freely and congretate regularly.

Giancarlo explained that “The Colony” numbered some 15 locals, mostly street cats but a few desperate housewives. Some have names. Those that don’t have been recently (and artfully) christened by Mini (example: “Salmone,” Tim, and “Fioco di Neve“). Giancarlo is not the gattaro (def: person who looks after the cats’ welfare). Instead, he’s “The Colony’s” enforcer. If anyone messes with the cats, their food or the grounds, he and Sara set them straight.

The colonia is maintained by two women (gattare, f.pl.) who provide food daily and ensure the animals are in good health and spayed. They’re also responsible for “The Hideaway,” the enclosed area under the pre-fab stairwell at the other end of my road. “The Hideaway” has two cat beds and is stocked with food and water. (Note to Telecom: “The Hideaway” probably has a land line, nowhere to be found in my apartment.) Mini notes that “Hideaway” cats rarely associate with “Colony” cats — “Hideaway” cats are missing ears and tails from close encounters.

In short, this is a far cry from Largo Argentina, Rome’s well-known cat sanctuary that is considered something of a feline oasi because of its large cat population and resources. “The Colony” and “Hideaway” boast neither cat calendars nor donation cups. They’re just places where cats should be able to live freely, under law (Comune di Roma Legge Regionale 34/97, article 11). The law states cats can’t be mistreated or forcibly removed from their “habitat.” The man in building No. 80 is apparently unfamiliar with animal rights and regularly removes the water bowls and food. Unhappy, the gattare have complained in a poster they’ve taped to local trees. It highlights fines for abusers — from €3,000 to €15,000. If you want to know more about the law (in Italian, obviously), the city’s site spells it out.

For those who live outside Rome’s centro storico, know that these are national laws. They govern treatment of all animals, with each regione and comune tailoring the bylaws according to need. For more detailed information on animal rights, visit your comune’s website or your local Ufficio Diritti Animali.