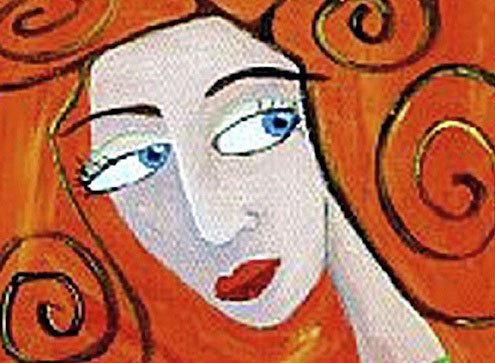 The girl with the dog — the moniker that has placed me in the annals of history alongside other famous girls such as “The Girl with the Pearl Earring,” “ The Girl on the Bridge” and the “Girl With Curious Hair.”
I

encountered Paola, Corsio, and Zeno courtesy of Trenitalia’s Roma-Venezia Santa Lucia route in early September. We sat together in carozza 9 and here’s how we “met.”

Thrilled with a live distraction for their rambunctious four-year-old son, the very hip Paola and Corsio then closed themselves off in animated conversation about Venice’s Biennale di Architettura, and I slipped into a book. Bella played with Zeno until he ignored her and fell asleep, or vice versa. When we arrived at Padua, it was Paola and Corsio who were asleep. Bella and I waved good-bye, snuck off the train, and disappeared from their lives.

This is my usual Bella/Erica travel routine — she entertains children while I entertain the thought of making friends with the parents, but ultimately read instead of chat. I always tell people that pets help you make friends, but only if you want to make friends.

A few days ago, while in the fat queue for Ryan Air, my bionic ear caught the faint whisper “Venite, c’è uno sportello appena liberato…” I followed the voice to the wide-open counter: no half-hour lines, no shouting, no missing my plane. Just two and a half people in front of me. I began thanking the man who had pointed it out when I realized they were my “friends” from the train.

They had no idea what I was talking about. “La ragazza col cane…” The girl with the dog — the moniker that has placed me in the annals of history alongside other famous girls such as “The Girl with the Pearl Earring,” “ The Girl on the Bridge” and the “Girl With Curious Hair.”

I’d left Bella with my cousin.

Despite what you may have read in my previous articles, there are times when traveling with pets is either unwise or impossible. Pets hinder al volo behavior. With pet travel, all must be planned and organized: hotel, airline permission, boarding. When traveling for short stretches, at the last minute, on discount airlines that don’t allow pets, or to “non-doggable” places (a.k.a., London and Asia), I usually leave Bella with my good friend Charlotte, dog-lover and pug owner. Unfortunately, my recent nine-day trip coincided with Charlotte’s month-long trip to Australia and I needed a dog sitter.

As I racked my brain for a low cost and loving solution I came up with the following options:

Giovi had an exam and could only stay with Bella for four days. Nora told me she’d have to convince her parents to allow Bella at their home for the remaining days. What if her pleading puppy dog eyes didn’t work? Option 3 was too much of a wild card, and boarding (option 4) was something I knew nothing about.

While Nora worked on her parents, I researched pet boarding in Italy. It’s fairly straightforward. Talk to pet-owning friends, speak with a trusted veterinarian or visit a local veterinarian practice with two or more doctors. Practices tend to have the most amount of information on pet sitting and pet walkers. Some group practices might even have boarding facilities. References must always be checked.

In the end, Bella was fostered between Giovi and Nora, relieving me of the guilt I would have felt leaving her with strangers or in a vet clinic (though I still carried “I abandoned my dog guilt” with me). All of this I confessed to Zeno in the back seat of the minivan while driving from Paris Beauvais Airport into the city center.

We both looked up at Paola. We had known each other for … four Eurostar hours, three Ryan Air hours, and two mini-van hours, plus a 45-minute pit-stop for espresso which also included commiseration (“we can’t find Paris and French coffee sucks.”) And just enough time to climb the option list: Paola, I’m pleased to say, is now level with No. 1 Nora. A chance meeting with a happy ending.