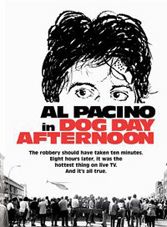 Sidney Lumet could have been making a propaganda movie for “Murphy’s Law” if most of this weren’t true. On a sweltering New York City day in August 1972, Sonny Wortzik and sidekick Sal tried robbing a Brooklyn bank to finance Sonny lover’s sex change operation. Once inside, the amateur duo found cashless tellers, took eight hysterical hostages, and soon found themselves surrounded by an army of cops and FBI agents.

In what amounts to an early episode of reality TV, Lumet flirts between black comedy and the absurd. Al Pacino is Sonny in a command performance that puts a premium on vanity and panic. Vietnam vet Sonny’s a nice guy, and so is Sal (John Cazale). But when Sonny (who’s married) gets cheers from gay activists and pleas from his mother, he knows he’s on stage.

Lumet senses intuitively that confusion, celebrity, and chaos are children of crisis and compete for attention. Neither Sonny nor the police want to fight it out (a 21st-century remake might have SWAT teams charging) so the story is nourished by character.

Pacino, Cazale, the hostages and a detective called Moretti (Charles Durning) bear the brunt of the tragicomic standoff. Most interesting is the Stockholm Syndrome alliance between Sonny and his captives; they don’t want to let him down. This is a funny, sad, and unique work. Frank Pierson (“Cat Ballou,” “Cool Hand Luke”) deservedly picked up an Oscar for the screenplay.