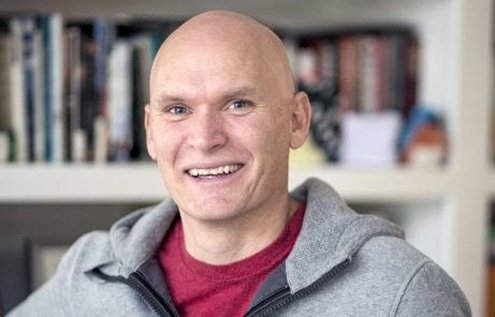 Doerr is also the author of "Four Seasons in Rome," a memoir about his year at the American Academy in Rome.
A

merican novelist Anthony Doerr’s “All the Light We Cannot See” opens with a blast: Allied planes shower incendiary bombs on the French city of Saint-Malo, a strategically vital medieval port on the northern Atlantic coast. After D-Day, a French girl and a German boy meet briefly. Their relationship will later anchor the novel’s haunting climax.

The hundreds of pages that follow these fiery opening scenes are a prelude to a more detailed look at the ties between Marie-Laure LeBlanc and Werner Pfennig. If Doerr is a captivating wordmonger — and he has a gift for animating the inanimate — it’s his talent for devising plot intricacies that makes his hefty volume a page-turner.

Whether it’s imagery or narrative construction, contrived momentum governs his fiction. Soon, he’ll jolt the reader backwards, from 1944 to 1934. The novel makes repeated reference to the flow of random particles. It fittingly follows that this same flow might someday see characters and events collide and connect — with an assist from any number of fictional coincidences.

Calendar-swerving chapters recount the separate adventures of Marie-Laure and Werner, covering a decade in their war-harrowed lives up to their seemingly random meeting. Doerr plays out their fragile innocence and suffered survival against the grave backdrop of European fighting and the bloody Russian Front.

1934: Marie-Laure lives in Paris with her father, Daniel, key-keeper to the 12,000 locks in the French Museum of Natural History. At age six, congenital cataracts leave her blind. She is LeBlanc (the white one), an innocent with “thousands of freckles scattering across her face like tiny stars.”

1934: At seven, Werner Pfennig (penny) is constitutionally undersized boy intimidated by a larger, powerful world. Orphaned, he lives in the impoverished Children’s House in Zollverein.

Here are two defenseless children soon to be caught in war’s destructive turmoil. Melodrama is in the offing, but nothing here is coy or saccharine. Doerr’s sentences are short and sharp, his imagery startling. The stark, one-dimensional simplicity of his lead characters mitigates melodrama while sharpening the story’s fable-like qualities. It’s a risky but successful maneuver.

Doerr’s leads are unfailingly pure. Marie-Laure never indulges self-pity. The Nazi invasion of Paris forces her father into refuge in Saint-Malo. There, he builds a miniature replica of the fortressed city so his daughter’s can use her Braille-trained fingers to better understand her location. Memorizing his model, she’ll use her white cane to count off houses and street corners. Perfect recognition of home and neighborhood will help her hide from enemies, aid the Saint-Malo Resistance, and begin her own dangerous radio transmissions. “I wake up every morning, and live my life,” she says. She is self-possessed and grounded.

Meanwhile, pint-size Werner also travels. Repairing the radio in the Children’s House so it can pick up foreign transmissions, he learns a skill that leads to a “promotion” into a Nazi formation school and its Third Reich brain-washing. Unlike Marie-Laure, Werner has never “owned himself.”

Numbly, Werner’s watches as broadcasters detected by his triangulation are decimated. Until one day — as from a fabled dream — he awakes into a sense of self that arrives late.

The next step would seem the climactic meeting and finale. Not quite.

Doerr’s complex war account also conceals a mystery. For two centuries, a vault in the Museum of Natural History has concealed a priceless blue diamond known as the “Sea of Flame” for its tiny red core. Legend has it that it saves those who possess it. When Paris is invaded, museum officials make three copies and hide the original, trying to blur the diamond’s trail. One of the diamonds is entrusted to Marie-Laure’s father. The Germans crave the valuable original.

Frankly, the novel didn’t need this pretty but banal sub-plot, whose echoes continue even after the death of most of the novel’s characters. Doerr seems reluctant to limit, or even close out, his fiction. After returning to and concluding the climactic 1944 encounter, he jumps forward to the 1980s, revealing the post-war lives of a number of surviving but secondary characters. Had he eliminated that section, he could have focused on the next and dramatically eloquent epilogue chapter, “2014.”

In the epilogue, 86-year-old Marie-Laure reflects on the motion of the known universe, which in the linked 21st-century is crisscrossed by infinite numbers of imperceptible electromagnetic waves. “Is it so hard to believe that souls might also travel those paths?” That her father and “a German boy named Werner Pfennig” might still be out there, in a “great shuttle of souls” that forever permeates the air.