Doctor T. and the Women 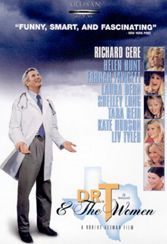 It’s been rightly observed that the late Robert Altman loved women. He’s also been accused (preposterously) of misogyny, mostly as a result of this film — written by Anne Rapp. Richard Gere is a respected Dallas gynecologist (a chancy if bold premise) who is doted on by patients and his steadfast office nurse Carolyn (old favorite Shelley Long). The women confess and he listens. Mostly, they’re afflicted with the time-on-your-hands melancholia of affluence. He must also deal with his two daughters, DeeDee and Connie, who are, to say the least, maladjusted. DeeDee (Kate Hudson) is so fed up with her identity crisis that she strips publicly in a shopping mall.

Dr. T loves his wife Kate (Farrah Fawcett) but cheats on her with golf pro Bree (Helen Hunt), though the act hardly seems predatory. In fact, Doctor T. is a decent man surrounded by self-indulgence to which he yields only reluctantly. Since Gere has rarely been allowed latitude to work outside his sex symbol typing, this is a refreshing treat. Altman’s portrait of female Texas wealth includes parody but doesn’t contain a spiteful bone. Not necessarily one of Altman’s more important movies, but as always deeply astute and in this case unfairly maligned.