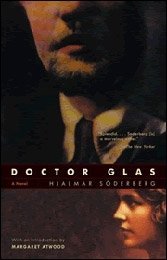 By Hjalmer Söderberg, translated from the Swedish by Paul Britten Austin

Doctor Glas’s view of humanity is skeptical if not abject. To him, moonshine is “secondhand” sunshine. When he thinks of the opera “Cavalleria rusticane,” he marvels at a melody that “spreads out like a disease all round the earth, doing its fated deed for good or ill…”

Hjalmer Söderberg’s lonely doctor is a turn-of-the-20th-century general practitioner plying his trade in bustling Stockholm. Life at once amazes and defeats him. He finds sex despicable and childbirth “a terrible symphony of screams and filth.” He speculates on the source of the “secret poison” in his soul, a pervasive awareness of the foul that makes him inexplicably angry. He seeks romantic heroism: To be, to do, to count — a lethal cocktail of narcissism, masochism and sublimated lust.

Thus he comes to hate a middle-aged parson whose beautiful wife can’t bear his sexual advances. Soon, he covets her, seeks to protect her, and begins to weigh action as a means to offset his landscape of meaninglessness. Written in 1905, this remarkable novel anticipates themes of repression, sexuality, self-doubt and obsession that dream-propelled Freudian literature would later peddle as its daily bread.

But what makes Doctor Glas unique is an ineffable sense of contempt for a world that cannot possibly satisfy its human inhabitants, even the well off. To Glas, looking out over his Turner-like Stockholm landscapes, “even the sunshine seems pest-ridden.” He cherishes the idea of euthanasia and speculates on the day “when the right to die is recognized as far more important and inalienable a human right…” than voting. “There is no guilt,” he insists.

Kierkegaard in mind, Gothic misery a constant, he decides the parson must die. Glas’s lonely mission, “Tell Tale Heart”-style, becomes means to participate in the “unremitting state of war which exists between oneself and the world.” He will no longer be a “born looker-on” but behold the beauty of action as “a wave in a greater movement.”

To say Swede Söderberg, who was ostracized for the book, was merely ahead of his time doesn’t do “Glas” sufficient justice. He manages, like Conrad in “Heart of Darkness” and Joyce in “The Dead,” to tangibly anoint psychoanalytic simmering and lay out the irrational hankerings that would soon infect the mannered European whole, opening the door to more extreme “action,” and later, after two wars, propel the existentialist response conjured up by the likes of Ernesto Sabato and Albert Camus.