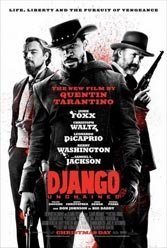 Tarantino’s verve, punch and panache has etched a special place in cinematic history, and “Django Unchained” continues in the same vein. In the dark recesses of the antebellum South, German bounty hunter Dr. King Schultz (Christoph Waltz) headhunts black slave Django (Jamie Foxx) to help with a contract. When Django tells him of lost love Brumhilda, who is owned by demonic slave-trader Calvin Candie (Leonardo Di Caprio), the two join forces to buy her. Schultz’s talk of a German fairytale in which brave knight, Siegfried, battles fire and brimstone to save his beloved Princess Brumhilda, sews the fabric of this messy tapestry of revenge, which Tarantino said was intended to start a new conversation about slavery. It does. It’s the silkiness of Schultz and ire of Django pitted against the callousness of a backwards world and the hostility of sun, sand, and sneers.

But behind the pomp and tenacity is an irreverent and bombastic Spaghetti Western that deals a moral uppercut to the seediest side of American history. Music, gore and one-liners — the film’s entertainment value — is balanced against a heartfelt drama about rebellion, with Tarantino’s signature sense of black comedy masterfully keeping the abundant violence tasteful.

What shows, contagiously, is how much fun Tarantino had in putting it all together. Yes, he might have tightened the 160-minute runtime, but that’s a quibble. “Django” is a treasure chest of radiant frivolity and precious iconography, with all the insignia of a timeless classic.