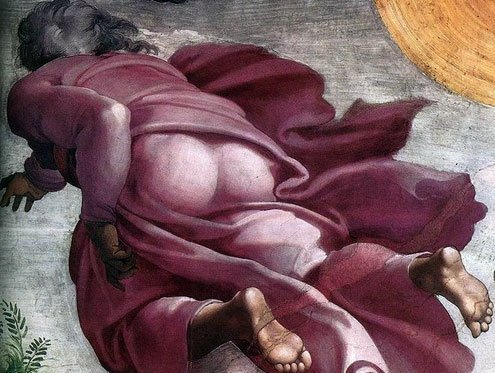 Detail of God from "Creation of stars and planets," Sistine Chapel.
I

have been unofficially appointed “God columnist” for this magazine. Don’t ask me how that happened, because I don’t even believe in it. God, that is. It’s not quite right for me to use gender-specific pronouns when speaking of what, to my mind, doesn’t even exist.

I think my appointment has to do with the fact that I can’t seem to stay away from the subject of religion. Try as I might, I can’t avoid it. It’s everywhere I look. To tell you the truth, I don’t really mind it unless I’m expected to revere it, pay it “respect,” or financially support it in any way other than voluntarily.

Then there are those other itsy-bitsy issues that keep popping up like the National Day of Prayer. Some of my secular friends are bewildered as to why we atheists are upset at something so benign, so negligibly harmless as a government-sponsored prayer day. It may sound silly, but once God gets its foot in the door, all sorts of unsavory things scamper in with the breeze.

I know this because I live in Italy, where the constitution states that all religions are equal, but that the relationship between the Catholic Church and the state is governed by the eighty-year old Lateran Pacts. Crucifixes are stuck to the walls of public schools, courtrooms and other buildings. There is even a Catholic religion-hour in school, with teachers handpicked by the Vatican and paid for by the state.

In the eyes of a secularist, this is a bad thing. It means that non-Catholics are put on a separate plane in public life. Where are our symbols, we ask? The answer from the religious apologists is telling, though. No longer are they mouthing off about “truth” and “salvation” in defense of their symbols; now they use more acceptable terminology like “The crucifix is an inseparable part of Italian culture,” or “It is a universal symbol of love.” As some skeptics have pointed out, that is also a working definition of pizza.

But now for my unremarkable loss of faith story. Losses of faith stories are fascinating, don’t you think? They exude an air of epiphany similar to that of religious conversion, at least on the surface. The truth is that I, apparently alone among my countrymen and women, came of age in the United States of America — the most devout developed country on earth — without so much as ever having peeked between the pages of a Bible. In fact, and I’m slightly embarrassed to admit this (but isn’t that what personal anecdotes so gingerly proffer?), but I wasn’t even aware that the Bible was about the Jews.

Of course, I knew I was Jewish. I just had no idea what that meant on a historical scale. Religion was perhaps the only subject — right next to politics — that was never addressed in our home. Years later, my sister would come to regret this omission. But it wasn’t deliberate. Our parents were simply not religious people, and the enlightened suburb of Baltimore we lived in was not Bible-drunk. In many ways it was the archetypal American secular experience.

It wasn’t until I came to Italy that I realized what I had missed. When I met my wife, she had just gone through an idol-smashing of her own, in which she had managed to break through the wall of traditionalist religion that society and her family had built around her. She had become infatuated with Judaism. That’s when I began to read the Bible, because being Jewish suddenly seemed electrifying and special. This was no longer midtown Manhattan.

I read the Bible, or “Tanakh,” as I learned to call it. I felt I needed to grasp Jewishness at its core. As I read, I tried hard to believe what I read. I began — for the first time — to employ expressions like “God willing” and “Thank God.” I tried praying, although I knew no Hebrew. I would mouth the words I read in transliterated Roman characters: “Baruch atah adonai, eloheynu melekh ha-olam…” Over time I began to make some sense of all this newness. I began to think deeply about God, observe a very personalized form of kashrut (the Jewish dietary laws), attend synagogue on holy days and fast on Yom Kippur. This lasted for about three years. Then, as quickly as it began, it ended.

Looking back, I realize I censored myself at every pass. I constructed an ad-hoc reality for myself out of holy books. I wouldn’t even read novels on shabbat because I wished to preserve some of its holiness. No matter that I worked on that day. God didn’t want me to be unemployed, did he? Then who would praise him? I’d stroll home from work, basking in the glow of the dying sunlight, then dutifully search out the first three stars which marked the beginning of the profane week ahead. It wasn’t much of a Sabbath, but I managed to make it feel special. I knew I could feel the presence of the shekhinah, the divine essence, descending on the world each week.

Or maybe it was just the smog at Largo Argentina.