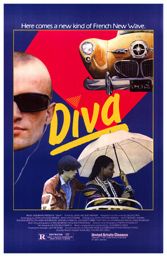 Jean-Jacques Beineix’s overnight sensation is a genre-buster that loses itself in itself and comes out the other side bizarrely whole. This is mental, not physical, style, which means the special effects arise from juxtaposition. Young Paris scooter messenger Jules (Frederic Andrei) worships American opera diva Cynthia Hawkins (Philadelphia soprano Wilhelmenia Wiggins Fernandez). Since she refuses to record (diva indeed), Jules makes a bootleg tape of a performance. But the coveted Hawkins tapes gets mixed up with one that suggests the chief of police is involved in a Mob-run human trafficking ring.

This rich premise, easy to expand and complicate, produces a cross-cultural thriller in which Paris is a beautifully jaded city of the mind populated by hucksters and romantics suspended between ennui and passion, thrills and meanness. Beineix, 35 when he made the movie, never reproduced the talent behind this memorable and original work.