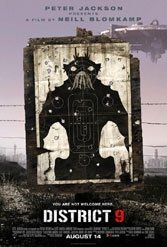 Imagine a population of hideous undesirables herded by the millions into slums outside a major city. Like blacks under Apartheid, they’re not only unwanted but viscerally objectionable. Their leper’s lot is managed by Multinational United (MNU), whose Josef Mengele-like researchers are eager to draw lab-rat subjects from their provocative population.

Director Neill Bloomkamp sets up a parable about prejudice and separatism — mistreated strangers in an ostensibly humane land — only to add a charged riff: The outcasts are tall, insect-like aliens whose mother ship stalled over Johannesburg 20 years before the action starts. They’re helpless, perhaps diseased, craving the only earthly sustenance they like: cat food.

Now, though, Johannesburg has had enough. It’s time to move the nearly two million aliens out of District 9, their longstanding shantytown (the move was filmed in Soweto). Enter Wikus Van De Merwe (Sharlto Copley), an easily-manipulated MNU lackey charged with relocating the aliens. Infected by an alien disease after going door-to-door with eviction notices, he gradually realizes the sinister agenda behind the relocations. Let the horrors begin.

Bloomkamp’s first 40 minutes, filmed in docudrama style, is a wildly imaginative fictional documentary that toys creatively with notions of dispossession and xenophobia. Nigerian predators prey on the aliens, who known as “prawns,” selling them food, weapons, offering them human prostitutes. Rarely has the screen seen such a vibrantly imagined slum world.

But where then to go with these visual riches? Bloomkamp, perhaps restricted by the genre, eventually turns to conventional sci-fi — alien “freedom fighters” eager for justice and Wikus’s underlying decency. Infected, he has little choice. Treated like an AIDS victim but fought over for the advantages his metamorphosis might bring to the greedy, he defends District 9’s inhabitants to forestall a species genocide.

Sadly, the early twist furnishes the narrative with its only trick. After that, it meanders predictably through gunfire, vengeance and multinational bashing. Unlike, say, “Cloverfield,” which never relinquishes its strangeness, or “Children of Man,” which gives mayhem a focus, “District 9” simply gives the rebel lepers a way out — and they take it. Clinton Shorter’s intrusive and uninspiring soundtrack doesn’t help.