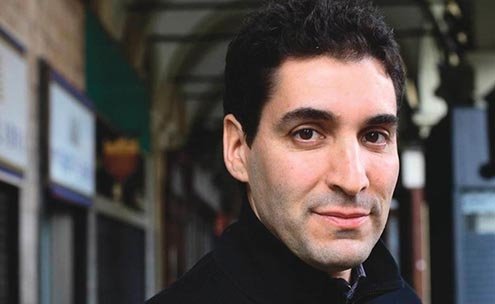 Said Sayrafiezadeh's "Paranoia": " When April arrived it began to get warm and everyone said that the war was definitely going to happen soon…"
E

dited by novelist Ben Marcus, “New American Stories” covers the decade between 2005 and 2015 and includes works by more than 30 major authors. Many of the stories in this collection are distressed and ironic, if not vaguely nostalgic for some more certain past. They place American society on the dissection table and use language as a scalpel.

The volume opens with Said Sayrafiezadeh‘s “Paranoia” in which unsettling phenomena operate in parallel but seem to interact. Narrator Dean notices that a unseasonal heat wave comes at the same time as a menacing swerve in national politics: “When April arrived it began to get warm and everyone said that the war was definitely going to happen soon and there was nothing anybody could do about it… some line has been crossed.” Unusual events course through the American city where Dean lives, their consequences felt both by Dean and the man he befriends, an undocumented Chilean named Roberto. The ominous prevails. Dean sees a train with “long tubular objects, missiles no doubt, twenty feet long, thirty feet, covered with canvas and strapped down with canvas belts.”

In his introduction, editor Marcus says the selections will “ambush reader-expectations through overwhelming language assault.” They are quite different, he explains, from “traditional, plot and character-driven fiction.” Though the stories are in fact rich in character and theme, it is keenness of language that maneuvers and holds together plot leaps, time overlaps, and terseness of dialogue.

Jesse Ball‘s “The Early Deaths of Lubeck, Brennan, Harp, and Carr” means what it says: four young men are dead before their time. Like Sayrafiezadeh, Ball examines the way social dynamics can alter events without a citizen’s knowledge. The four youths of the title are in a pub when one tries to pick up a girl at the counter. “You know,” she objects, “you can’t just speak to people. That’s not how things are anymore.” In fact, on the pub wall is a list of rules that covers all behavior in the town. The list is both new and puzzling to the youths, who get a little drunk and do something foolish, and damaging. In the four succeeding episodes, each learns how the new system works at a price.

Time and again, stories quickly and nimbly crisscross time and narrative lines. “A story is an improvisatory dance,” adds Marcus, “think of language as your primary way of performing it.”

Robert Coover‘s “Going for a Beer,” which comes at the volume’s midpoint, is a reminder of just how long the 84-year-old Coover been an innovative storyteller, able to effectively straddle the print and online eras. Coover’s early hypertext fiction workshops allowed online readers to click on boxed words to tap into a range of virtual allusions. Later workshops shifted from reader to author. While writing, his students were placed in a virtual reality environment called CAVE that integrates visual imagery, narrative, sound and text. His emphasis on such integration has had an immense impact on the course of American fiction.

In Coover’s story, an alcoholic standing at a bar has a series of hallucinations based on his life’s events. Is the woman in the corner his ex-wife? Did he just have sex with her? Is anyone sitting there at all? Coover is a master plotter. By the story’s end, his alcoholic’s unrelated but interwoven visions all make collective sense.

Kelly Link sets character distress against the background of a dystopian future. In “Valley of the Girls,” a ruling group of very rich elders — the “Olds” — clone real children to make them into replacements — “to protect [the Olds’] generation from the kind of embarrassment a real child often causes.” Perhaps in homage to a style in fashion at the start of the online era, the names of the children are set in hypertext blocks. In print, the jokey device diminishes an otherwise affective tale.

Zadie Smith also goes dystopian in “Meet the President.” Standing on an English seacoast ravaged by an unknown war, a boy plays a virtual reality game devised by the nation’s new leaders. If he wins, he gets virtual introduction to important people, like the president. His efforts are interrupted when he meets two of war’s impoverished dispossessed. They lead him to a hidden survivors colony in which the virtual is set aside in favor of actual emotions.

Not all the writers chose the dystopian means or parallel lives. Deborah Eisenberg‘s enthralling “Some Other Better Otto” examines everyday dialogue in search of the language of love.

But Marcus is right: these edgy stories assault the ways we view our lives, and our society. Here’s a long volume that’s also a brilliant read.