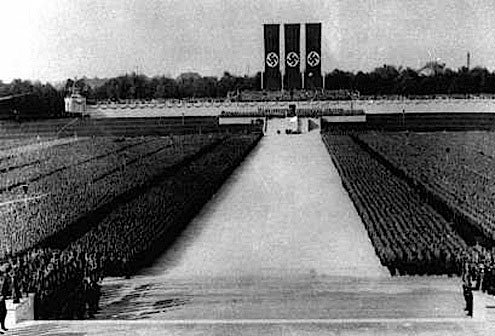 The triumph of unbridled narcissism.
F

rom time to time I revisit “Triumph of the Will,” Leni Riefenstahl’s remarkable propagandistic peon to Nazism filmed at the Nuremberg rallies of 1934. Intellectually, it is both admired and disdained.

So why would I both admire and disdain something so noble as a papal funeral?

After all, memorial rites are little more than lubricants for holier passage. They provide non-coercive catharsis for assembled masses. They draw both the curious and the devoted.

More delicate, however, is how proportion and perception fit in.

The day before the funeral I received a message from a Catholic colleague. “This is all plain bizarre,” she wrote.

She didn’t articulate what she meant, so permit me to try.

Breach proportion and you hit the other side — pretense. The masses who attended the papal funeral did so in the excited spirit Riefenstahl identified at Nuremberg, with participatory passion placed ahead of skepticism. Rallies of all kinds gain oxygen from numbers. Whether in Nazi Germany, ancient or modern Rome, numbers confer validity and speak for a kind of veracity.

Whether they should (or even do so accurately) is another matter.

A necessary digression: I grew up in cynical times. Fraternities and sororities, the lifeblood of college campus life today, did not exist at my New York City university. Pledging allegiance and vowing association were considered an anathema to free will, the lifeblood of the right to dissent.

But norms fascinate because they shift. The grateful conformity that dominated the post-war — “Leave us alone to be superficial,” car-maker Enzo Ferrari once quipped. “We lived the war.” — has returned to vogue, responding to the still-edgy aftermath of September 11.

When the earth below breaks recklessly and without warning, when personal break-ups prevail over unions, hand-rails look inviting. A funeral is such a rail.

But does it appear spontaneously? No.

T.S. Eliot suggested that reading poetry required suspending disbelief. Eliot’s unwitting followers include TV broadcasters, who plow in Riefenstahl’s fertile fields. Images and narration create larger-than-life circumstances into which masses crave immediate entry. Add a globally familiar figure, the pope, and the wish for inclusion deepens hypnotically. All want to nuzzle the machinery of sorrow. Vicarious and circumstantial mourning are close behind.

Modern grievers use old canon. Adults and the elderly yearn to personalize bereavement by putting heartache into a figure beyond reproach, someone known, benevolent, who can embody all life’s losses. The pope was thus immediately available to dislocated affect.

Among the young, who came to Rome by the hundreds of thousands, attendance in Rome affirmed community. A funeral is a 1960s “happening” (though today’s “happenings” depend on television’s anointing.) When making history seems remote, presence in events is the nearest thing to mattering, and participation proof of life. Later, you can say you were there, in 2005, in Rome. Whether such a bonding surge is ultimately spiritual defies neat answers. But unlike their 1960s precursors (whose defects are legion), the youth of the moment is generally uncritical, adulatory toward protective authority, and accepting of manipulation.

None of this minimizes manifestations of good will toward Pope John Paul II, whose extraordinary “outreach” — the word of choice — is now rewarded by immense “in-reach,” particularly among Poles. Poland has lost a hero. In Soviet Russia, when first Lenin, then Stalin died, the nation came to heel, transferring drama from the ceremony-rich Rome church.

My Catholic friend has another question. When so many are in need, why should mourning supplant more palpable altruism?

But death mesmerizes and ferments; it neutralizes perspective and proportion. As human life spans lengthen, death’s vicissitudes only fascinate more. And the pope publicly played out the final stages of his illness.

Essential urges carry risk. Fail to differentiate between respect and obsequiousness, piety and deference, regret and redemption, and discourse collapses. Skepticism nurtures pluralism and conversation. Obedience, while it makes for eloquent Masses, is indiscriminate.