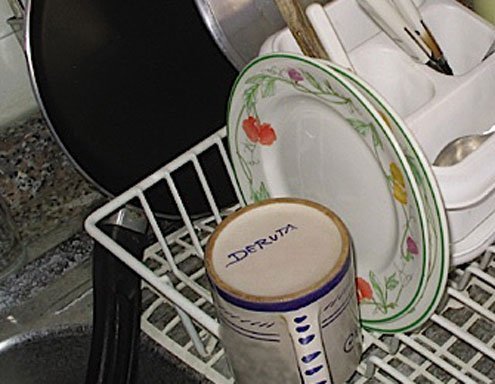 hen you first start dating an Italian, it’s kind of hard not to slip into mom-mode. The whole idea of taking care of your boyfriend as his mamma does seems a bit precious at first. He appears to be helpless and your gut instinct tells you to run to his side and make everything right. Like mamma does — if not better. That’s just how I felt when I first started dating Fabio. I showed him my love through my cooking and made his bed in the morning. Both very effortless things. But soon after, those effortless things turned into very painful chores. Not only did Fabio not do chores, but he didn’t know how to do them. Simple things like using the washing machine or boiling pasta seemed like a calculus equation for him. That’s because he always had someone there to do it for him. That would be mamma. So, he never bothered to learn. Well, I was all game to cook and make his bed, but I never signed up to do all of the above.

I decided months back to give Fabio a crash course since we’ll be moving together in May when my lease is up. Survival Skills 101. He needed them. Badly.

I sat him down and said, “Let’s talk chores.” Now, Italian moms can call me the ragazza moderna: guilty as charged. But in my house two people make the mess therefore the household work gets divided. When my friend wants her man to do some things around the house, she gives him a homework regimen. And I have to hand it to her, the results were fabulous. He not only helps out with the chores, but he even has favorite ones.

I doubted Fabio would grow to like such homework, so I threw her idea out the window. If I left him a “To Do List, “ it would fast become the “To Do After La Partita List.” With Fabio, I’d need to start with the basics, from the ground up. Therefore, it was important not to get too complicated too soon. Start with the dishes. One night after dinner I asked Fabio to do them. There were only a few, so I figured he’d be up to the task.

He looked a bit mortified at first, but for someone who hadn’t done any chores in his life I was impressed. He tracked down the yellow rubber gloves. I didn’t even know where they were hidden. But hey, whatever works. After 10 minutes, the dishes were done. Wow.

I decided to take it to the next level. Next came, simple meals like frying a chicken pattie in a pan. Even that didn’t seem to phase him. Deep down inside, his willingness to learn made me proud. Plus it was kinda cute seeing him with those yellow gloves on. He admitted he looked a bit ridiculous. But he had fun with it. He called himself the “Sexy Washer.”

The Survival Skills course was working smoothly — until mamma returned to town. After we finished dinner, I asked Fabio to wash the dishes. We’re talking max four dishes. He went into the kitchen, put on the yellow gloves and started washing. His mom walked past the kitchen and caught a glimpse of him. “O mio dio! Mio figlio! Che sta faccendo?”

Oh boy, did I catch hell. I was lectured about how men in Italy don’t do dishes. Really? Hadn’t heard that one. Needless to say, I didn’t stop hearing about those damn dishes for a month. And surprise, surprise — Fabio thought that because mamma didn’t approve he was off the hook for further chores. He took a nice long break.

Then a couple of weeks ago, I invited his entire family over for a Mexican dinner. I was busy working several burners, making the fajitas, refried beans and rice. Fabio popped into the kitchen and surprisingly offered to help out. Standing right behind his mom, he innocently asked, “Amore, vuoi che lavo i piatti?” I shot him a killer look. “Forse e’ meglio se puoi apparecchiare la tavola,” I answered. And the table it was.