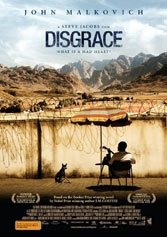 In one way or another the characters of novelist JM Coetzee are damned. Life a presaging of a larger humbling waiting to happen. Director Steve Jacobs (with only TV credits to his name) shows a keen understanding of the Coetzee’s tendency to the ominous by casting the mournful John Malkovich in the role of middle aged Cape Town literature professor David Lurie, who heads out to stay with his daughter in the South African countryside after a sex scandal costs him his job. A womanizer, he’s been dismissed from his university an affair with a colleague. But the disgrace hardly dents him. He seeks solace in his own melancholy fortitude.

That changes in the country, in the presence of lesbian daughter Lucy (Jessica Haines). Feral forces began challenging intellect. Lucy loves dogs, leading father and daughter to muse about the connection between animals and primal forces. The musing in turn beckons the bestial: The farm is attacked by intruders, Lucy raped, and Lurie disfigured. Lucy’s helpless dogs are shot.

Malkovich’s Lurie, aloof, bewildered and finally terrified, gives the film a fierceness of shape absent in the novel. The assault not only burns Lurie’s face but disfigures his emotions. His classroom haughtiness is stripped away. The movie, like the book, is about odiousness at the core of things. Intellect can’t contain it, nor can rationalization. Free will and justice can be canceled without warning. Few broadcast the downward spiral as eloquently as Malkovich. This is his kind of material.