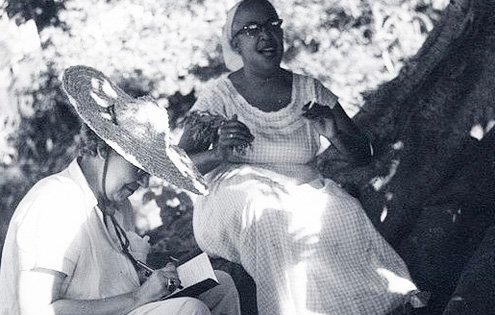 Lydia Cabrera doing what she did best: listening, and writing it down.
T

he role of women in early 20th-century anthropology is usually associated with Ruth Benedict, Zora Neale Hurston and Margaret Mead, widely esteemed Americans who studied under German-American anthropologist Franz Boas. Hurston in particular is known for her work in African-American studies. Her pioneering studies took her to the American South and the Caribbean between the two world wars.

But the efforts of Cuban Lydia Cabrera, who also focused on the sweeping impact of folklore and was active in roughly the same period as Hurston, remain disconcertingly unfamiliar to non-Spanish speaking audiences.

Born in Havana in 1899 to affluent and renowned Cuban scholar Raimundo Cabrera and his upper class wife Elisa Marcaida Casanova, Lydia was in direct contact with Afro-Cuban cultures from her earliest childhood. Her nanny was a former slave of African descendent who regaled her with tales of a remarkable 19th-century universe (Cuba had abolished slavery only in 1886). By the time Cabrera moved to Paris in 1927 to study art and religion at L’Ecole du Louvre, Europe remained under the sway of African art and aesthetics, a trend inspired by German ethnologist Leo Frobenius — who brought back artifacts from the then-Belgium Congo and Sudan — and celebrated by artists such as Picasso, Matisse, and Braque. In Paris, Cabrera suddenly became aware of the importance of the African folklore her nanny’s stories had helped bestow.

At the time, the ties binding Cuba to West Africa were little known in France and even less in Cuba, where the study of anthropology as a scientific discipline was still in its infancy. Fernando Ortiz (with whom Cabrera would later work) was the first Cuban scholar who saw Afro-Cuban music and religious rituals not merely “black people’s fun,” but also as a complex and structured universe in its own right, one worthy of scholarly attention.

While still in Paris, Cabrera published her first book, “Cuentos Negros de Cuba,” (“Black Tales from Cuba”), a collection of 22 stories based on her nanny’s narrations. Once back to Cuba, she moved to a ranch near a Havana barrio and began researching Afro-Cuban culture and religion, a process that would eventually consume a lifetime — though she’d never been formally trained in anthropology.

Cabrera developed a methodology based on what I’d call empathic observation. Her informants were elderly black people, in many cases the children of Africans. In transcribing their tales, she respected both the content and the peculiarities of the “black Spanish” they spoke. Cabrera was always wary of what she called “the dangerous filter of interpretation,” namely the tendency all recorders of speech and stories to frame what they heard in terms they already knew and understood.

Earning the confidence of her informants — “inestimable sources,” she called them — wasn’t easy. As an upper class white woman, she belonged to a social class that had enslaved black people for centuries, despising and forbidding their religions. She used respect and empathy to gradually overcome strong resistance she herself acknowledged. “It puts the patience of the investigator to the test. It takes considerable time … to understand the euphemisms, the superstitions, the language… and the things that cannot be clearly said aloud,” she wrote in the introduction to “El Monte” (“The Wilderness”), published in 1954 and considered her masterwork. That patience — a desire “to think like them” — produced friendships that led to extraordinary, polyphony works. Her kaleidoscopic books, in which juxtaposed voices swell into a symphony of vernacular and onomatopoeia, reveal the remarkable oral richness to which she had access. Ironically, it is this access that makes Cabrera’s ethnological studies so peculiar and so challenging for translators. They face far more than just a Spanish-language writer.

“El Monte,” for example, is an extensive treatise on Afro-Cuban ethno-medicine. It carefully examines the role of the vegetal world in Afro-Cuban religions and its ceremonies and is a rare example of a scholarly publication-turned-bestseller, since it became a favorite of practitioners of Afro-Cuban religions.

There were two reasons for its success. First, Cabrera’s lengthy and accurate inventory of herbs and their ritual uses provided both an ethnological and practical roadmap of ancient traditions. Second, the musical tone of the language itself was in the alluring high tradition of oral storytelling. Practitioners of Afro-Cuban religions received unique insight into the roots of their creed while a more general audience found the entire subject fascinating.

Cabrera left Cuba in 1960, soon after Fidel Castro rose to power, living in Miami until her death in 1991 at age 92. Even during the harshest years of Castro censorship, when books by other exiled Cuban authors were virtually impossible to find, used copies of “El Monte” continued to circulate, evidence — if such evidence was ever necessary — of Cuba’s attachment to its African roots, and the inextricability of black and white in the country’s melting pot.