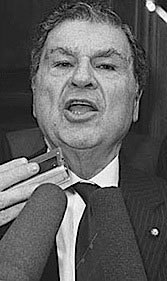 hen I was editor of the Rome Daily American two decades ago I had little love for President Ronald Reagan, and said so unabashedly. I wrote editorials deploring U.S. involvement in El Salvador and assailed trickle-down economics as a big business excuse for dining on the misbegotten. This did not endear me to officials at the U.S. Embassy who, at the time, seemed ideologically predisposed against anti-Americanism, particularly if expressed in a newspaper with a rich Rome history that called itself The Daily American and for its Cold War allegiance to Washington had once received modest backing from the CIA (through the Italian Social Democratic Party). One afternoon, after the publication of an offending editorial, my office phone rang. I remember the voice vividly, because it had Jewish snap and gravel. “Chris, I really like your writing,” said the voice, “but sometimes…” and the voice trailed off, before beginning again: “Sometimes you just get it wrong, so why don’t you just come over here and let’s talk about some things.” The voice belonged to a man named Maxwell Rabb, a former Eisenhower chief-of-staff who at the time was the United States ambassador to Italy. I admit it; I was stunned.

In the coming months and years I met Rabb fairly regularly, at the embassy cafeteria, in his office, and once at a café’ near the embassy (“Now, don’t mention you saw me,” he’d say.) Though Rabb never persuaded me to love Ronald Reagan he taught me an important lesson: tolerate, and listen to, the other side. Fail to listen and you think and write in a vacuum, which is to say at your own peril.

The Rabb story comes to mind the aftermath of these elections, which mark the worst kind of Europeanization of America. Both sides snarl at one another with a distemper so imbued it seems contaged with parliamentary rabies. Liberals howl unfettered against the idiocy of President Bush, sour-grape Democrats allege voter fraud with little evidence, self-satisfied Republicans crow about a moral mandate (destined to crumble unless they modify their extreme positions, which they are unlikely to do.)

Beneath the verbal battleground is a more sinister, if predictable, settling of accounts. This little magazine, The American, still a babe in the arms (nine months old), will lose precious advertising and financial support from Italian businesses as a result of its decision to support Democratic candidate John Kerry online. It will be further hurt because its editor, the same man who attacked Reagan in the Daily American of the 1980s, chose to make comments critical of Bush on Italian state television.

Again, none of this even slightly surprises me. Mass media and campaign managers, desperate for public attention in a time of public distraction, have made venom and vindictiveness into standard issue. It is so standard, in fact, that its promulgators are any longer aware of their own capacity for hatefulness and foul play. The attack on Kerry’s Viet Nam war record, disavowed even by Bush, was unique in its foulness.

All of this returns me to Rabb. Did the U.S. ambassador need to call the editor of a daily newspaper in the outlying and marginally important city of Rome? No, of course not. Nor did the editorials reach a broad enough political audience to do damage worth attempting to limit. But that was not why Rabb moved. A staunch Republican, he was also a decent man, and a clever one. He disagreed with what he read and responded with a forward gesture that because it was conciliatory helped accomplish his end, which was to modify criticism of his president. He was old-school and chatty. He was not haughty, not afraid; he dove in confidently, sentimentally. Rabb was very American in a way America’s new ruling class, steeped in righteousness, cannot imagine, or feel the need to; Italy’s leadership is similarly aloof. Rabb did his diplomatic job. Never once was I invited to an embassy function, nor did I wish to be. Instead, Maxwell Rabb, in his 70s, and Christopher Winner, the 30-something local newspaper editor, conducted a vivid off-the-record exchange that I’d like to think enriched the aging Rabb as much as it improved the young Winner.

It even paid practical dividends. When I tried to start a second daily newspaper, in 1985, Rabb, though he knew my unreformed political views, wrote a letter supporting the need for such a daily in the community and made several back-door calls to potential Italian backers. Pluralism, for him, had actual and tangible meaning. The newspaper was born from such secular but wholehearted faith, American faith not as it is now but as it was and should be.

So, to those who prefer vendetta and spite, remember that both have a way of circling counterclockwise against those who embrace their amoral allure; wrong can hate itself in time. One advertiser, in detonating a private campaign to publicly discredit The American, said it could not be a part of a publication critical of both Silvio Berlusconi and George W. Bush. Fair enough, but Rabb added a moderating, and principled, caveat. “I don’t like what you’re writing,” he’d say, “not at all, so let’s talk about it.” Until talk is reinstated, and with it the tolerant decency that keeps disagreement from deafness, we’re in for brutal and vindictive times. And no, I do not expect my phone to ring.