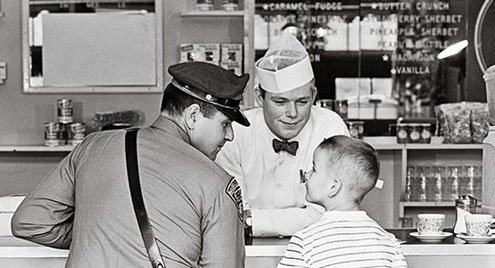 Norman Rockwell is dead...
A

n uncomfortable truth underlies America’s debate over political rage in the aftermath of a congressional assassination attempt that cost six lives in Arizona. Amateur-hour manifestations of anger, disdain, and resentment are easier and more entertaining than think-twice temperance, disdained as restrictive by those no longer culturally trained to distinguish between criticism and insult.

Repartee as blunt-force trauma, dirty-for-dirty, is not a fad. Blaming it on Sarah Palin is no more satisfying than accusing liberals of blood libel.

The fault, at least in part, is the collapse of the sardonic, which along with wit and irony once put grownup brakes on political savagery. Hatred rubbed up against buffoonery. Denunciatory rhetoric punned itself. When Nixon-era Vice President Spiro Agnew called liberals “an effete corps of impudent snobs who characterize themselves as intellectuals,” he was an actor in his own satire.

But satire has since grown fangs. Contrary positions are tied to self-promotion and one-upmanship, which encourages hyperbole. Wicked wit, once comic, no longer knows to steer away from the vituperative and the vindictive, twin-addictions that immediately corrupt the impolite into nastiness. Yes, new media is to blame, at least in part. Life in a virtual community pays more attention to shouters than the plucky.

And though political shouting was always the norm, the molecules of its harshness were theatrical. Would-be demagogues frequently collapsed into caricature. When the noxious huffing of Red-baiting Joe McCarthy turned uncouth and belligerent, a tempering agent intervened, namely Edward R. Murrow.

A sense of swordplay kept national debate from collapsing into insult. If insult had no boundaries, warned pundits and columnists, some of them insulters by trade, rules would lose their meaning. Woe-betide the disappearance of decorum, since anything-goes egalitarianism meant inviting all Hell to break loose.

Welcome then to Hell. Free speech, democracy’s most basic kernel, has lost touch with its humanizing architecture. Left to its own devices, speech is little more than instant arousal informed by bias, which is the backbone of the online world. Its don’t-tread-on-me genetics encourage adolescent-style catharsis that before the digital age was expressed at least in part through mob rule.

A mob is a mob, whether its punch-outs happen in alleys or in cyberspace, and both online dispute and commentary reflect a collective regressed into pubescent brawls, minus real fists and the whites of eyes. But grownups usually broke up such fights.

American adultness was long portrayed as the endpoint of a socially directed transformation from high school self-indulgence to a more considered, well-informed phase of life whose chief virtue was restraint as synthesized and chastened based on day-to-day experience. So what happens when the immature phase becomes the norm and grownups are the alley fighters, or help promote the brawls?

Restraint is waning at least in part because so-called free speech platforms, the Nirvana of new-age assertion, have been peddled unattached to the Boy Scout values that once helped focus and define the adolescent-adult divide, at least in America.

Would Steve Jobs and Bill Gates, knowing this now, have done anything differently in 1985? Unlikely. Commerce is part of culture, and culture changes. Hormonal urgency and overheated wording suit the devices of the time, and vice versa, facilitating the transmission of unadulterated exhilaration that all but obliterates the relevance of life’s middle registers. Online insurgency cuts to the yeah-nay quick, lest distraction interfere.

Privacy and patience are passé, since each puts a moral cap on the vital rawness of the 21st-century self. Just as 1960s scribblers convinced themselves they’d struck on poetry just by writing down a few lines, new generation polemicists are flattered by the sound of their voices, whatever its content and timbre. Awarded a screen’s veneer, speech grows cocky and infantile.

Expecting the respectful from a time that advertises mockery for fun and profit is at the very least unrealistic. Norman Rockwell died years ago.

“Only a more civil and honest public discourse can help us face up to our challenges as a nation,” says a rhetorically adult president. Adult, in fact, to a fault. If only full-fledged adulthood still had a pulse.