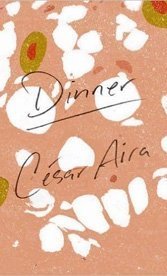 César Aira’s hilariously macabre carnage begins meekly with a middle-aged bachelor at dinner with his mother and a friend in the town of Coronel Pringles, Argentine (where Aira lives). The friend is odd; the elderly mother fussy; the situation absurd — first because the narrator is stuck at home “without a job, without prospects, without anything,” leaving him ample time to think twice about the outcome of a “well-rationed mixture of reality and fiction.” At the dinner, the apparently affluent host begins showing off bizarre toys and music boxes and finally a rubber elephant mask, which he puts on. The aftermath of such an evening, in Aira’s Jekyll hands, is an invitation to make havoc.

The bored and channel surfing narrator, once home, discovers his town has drifted into its own zombie movie, with local corpses risen from the cemetery to run amok in search of endorphins. Seems that the sour-smelling dead — “…unshrouded goose stepping killers…” — miss the rush of life, particularly the gossip, and how else to find these “little drops of happiness and hope” but in cerebral cortexes ripe to be “sucked up by a strange tongue”? Yum.

Aira’s zombie attack is so deadpan memorable screenwriters should scan it for fodder. Here are “capering ghouls” that “improvise dances in the middle of the street — sarabandes, naked jotas, perforated rumbas” while performing “ferocious vampire lobotomies” and “slurping” around to make sure they get every last bit of brain matter, and with it their beloved endorphins.

What does opening dinner sequence have to do with the zombies? Nothing per se, except that being left out town chitchat apparently annoys the silent majority, still eager to know all about the “oddities that make people interesting.” The dead, “in their depressing existence in the afterlife, have developed a true addiction to endorphins…” Or more to the point a craving for the identity they lost when they died.

Aira again demonstrates that whenever his mind is triggered toward the cinematic he can leap into imaginative crevices not even the dead could dream up. A life of “nothingness” means going heavy on the something. “Craziness is more an exacerbation of logic than its negation,” says the narrator, and the happy-to-exacerbate Aira gives his man 100 pages to prove his point.