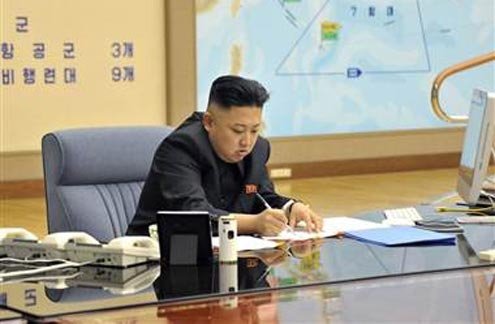 Kim and his iMac: the end of the world as we know it.
W

e may yet get around to mocking an era in which normal men, women, and children — not the Brahmins of privilege — trouped to a Rome dinner so enslaved by distracting devices that an evening among friends was transformed into the fidgety sum of digital input, its incoming and outgoing flux giving passing hours their me-first locomotion. But for more immediate relief there’s North Korea’s most recent Kim, who has appropriated the era’s shared adolescence by issuing tantrum-like threats to blow up everyone simply because he’s unhappy at being penalized by sanctions.

In the West, such pre-teen stomping fits are usually met by parental time-outs, except that that forcing a nation into good behavior rarely works, all the more in a world increasingly tied to the lure of scowling but inarticulate emoticons.

Children of a sort are everywhere, including among Italian adults, especially the new wave of political reformers who seek an end to executive government in favor of decision-making through online consensus. This would, go figure, somehow make the legislature more responsive to the restive “voice” of public fidgeting.

Interesting notion, if only exterminating politics didn’t risk putting commotion ahead of what already overloaded human beings can actually manage, the same human beings, by the way, vital to maneuvering the bulky ship of state, their governing vocation a talent that online outpourings have so far failed to replace – ask Egypt or Tunisia.

But back to the Rome dinner table, where stunning blondes, mothers all, celebrate stunning children, the evening chock with pads and tapping, kids controlled by their handlers, mostly Filipino nannies charged with managing the hubbub to allow parents to continue their disparate distractions, chatting between calls and text messages, an urban if not urbane scene that portrays one version of the “upgraded” Italian family meal. It’s a show, yes, and a loud one, but hardly in line with local tradition, even in neighborhoods less affluent than mine. Parents are removed from their children, and from other adults, in ways those trained in eye contact would have found hard to digest.

Hand-held devices dissipate the directness that the “collective” meal once exalted. Though family trappings persist statistically, they’re often based on simply sitting down in one place instead of personal interaction. Machines deflect the theatrics focused on table companions.

Consider the scene before me: three women and three men involved in conversations but none with each another. And their children, talking and sending until someone fails to answer one of them, a boy, who brays in exasperation to his Filipino nanny who tries calming him while the adults turn to talk of summer plans, this before their own monologues are buzzed or rung out. “The world is crazy,” says one parent, responding not to what’s been said but to a text message no one else has seen.

Crazy world indeed, one in which the newest young Kim (and lackeys) can do their own version of braying. Summoned into a real war, possible but improbable, insular North Korea wouldn’t last long. In the harder, non-digital world, South Korea, the United States, and even China would intervene to stop any conflict that risked marring global commerce, at least on paper. More ridiculous, and sublime, is iMac-using Kim’s love for American basketball (Dennis Rodman visited recently, the little dictator to his left). How bad can it be, media ask tongue and cheek, when Michael Jordan’s legacy is squeezed into the picture?

Not bad enough, clearly, to dismay a global “conversation” that remains more focused, at least officially, on Cyprus’ woes (Greece is no longer trending), EU unemployment, and Beppe Grillo’s salvos, the three conversation-starters that — aside from chitchat — precede Rome’s incoming and outgoing.

Humans always make a ruckus from the times they’re handed, and these times supplement their usual follies with magic black holes potentially able to relieve the hindrance of questions and their poison, judgment. Thus the enlightened jungle offers an escape from primal ass sniffing.

For Italy’s playground revolutionaries, the tech option also suggests re-inventing the national wheel, with wrath the only constant. Kill the government, they say, and kill the journalists while you’re at it, bash the president. Kim & Co. push it a step further: Kill all those who don’t applaud. Then again, with the incoming and outgoing eliminated, who’d be left to post the fallout?