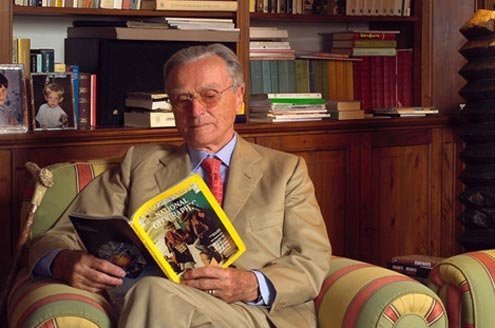 The late Franco Biondi Santi in his living room: wine by the book.
I

didn’t age wine in a cellar before coming to Italy. I typically picked up a bottle with the groceries and opened it at the dinner table a few hours later. The idea of putting a wine away for my grandchildren wasn’t a part of my American mentality.

But Italy presented me with a different reality. Here, homes and even some apartments have wine cantinas, a much better option than using tiny refrigerators that consume large amounts of costly electricity (about three times higher than the U.S. average.)

Now I’m sold on the idea, particularly since wines like Barolo, Amarone or Brunello have their own special demands. Most people buy them knowing ahead of time they’ll need to store them in cellars for between 10 and 20 years before they’re ready to drink.

I dined alone recently and found myself near a group of Americans who had ordered an expensive bottle of 2008 Brunello di Montalcino (released in February). We started talking about wine, and they offered me a taste. It was a beautiful wine, yes, but with tannins so young and strong they left my mouth feeling dry and uncomfortable.

When I told them the wine needed cellar time of at least eight-to-10 years they looked at me dumbstruck. They had no idea. I explained that I’d ordered a 2010 Rosso di Montalcino, made with the same grape variety but meant to be drunk young, usually in three-to-five years. It was significantly less expensive and just right for our meals.

I only started putting wine in the cellar three years ago so I lack grand old bottles to pull out on special occasions. A few weeks ago, however, I won the tasting lottery, so to speak. Wine executive Sergio Esposito invited me to a dinner to taste Biondi-Santi Brunello di Montalcino Riserva from 1969, 1970, 1971 and 1975.

I had visited Biondi Santi a couple of years ago to see the vineyards, tour the cellar, and taste recent vintages. The formality and elegance of the front driveway’s cypress trees matched that of then-patriarch Franco Biondi Santi, who died in April at 91.

Franco Biondi Santi’s great-great-grandfather created the first Brunello in the mid-1860s and each member of his aristocratic family had carried forward the tradition of making wine that expressed the sangiovese grosso clone, known as brunello, “little brown one.”

Although Franco significantly enlarged the estate, he maintained the family’s commitment to traditionalism — he wouldn’t allow aging in the small wooden barrels known as barriques. On my tour I saw botti grandi (large wood barrels) some dating back to the 19th-century. I was also told about the family tradition of ricolmatura, best translated as “topping up.” Franco Biondi Santi last topped up in 2008, opening each vintage bottle, inspecting it, smelling and tasting it, and adding a slight bit of vintage wine from the barrels in the family cellar to bring up the level in the bottle. As a final step, he installed a new and tighter cork.

The wine’s 40-year plus longevity secret was its tannins and acidity, but ricolmatura helps. Clients who own number-tagged bottles can bring them back to be topped up, but aging defects are rare.

Franco Biondi Santi’s private cellar, to which only he had access, contained hundreds of bottles, a family treasure trove of vintage wines to be used as comparison models to test aging capacity and make new wines.

In a sad twist of fate, a creditor took possession of the cellar after a bad business deal. Enter Esposito, who had worked with the family for years and is the founder and CEO of Italian Wine Merchants and the Bottle Asset Fund, an upscale wine investment fund. He bought back the cellar and has since begun putting some of its top bottles on the market.

Since Esposito’s approach demands that top-notch wines come with excellent food, the pairings at his dinner were exquisite: delicate beef carpaccio for the 1975, veal tortellini with the 1971, sliced breast of duck with the 1970, and two small lamb chops with the 1969. These were wines made when I was in middle and high school.

Instead of the robust characteristics of young Brunello, the aromas and flavors were subtle, almost fragile. Each was remarkably different, perhaps because age had accentuated the variation in vintages.

When, soon after, I heard the news that Franco Biondi Santi had died, I decided it was time to start paying more attention to my cellar. Some of the bottles may outlast me, but those I do manage to drink will have been worth the wait.