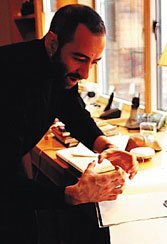 Diego Binetti can’t remember the name of one of his mother’s seven Christmas Eve fish dishes, and it’s driving him crazy. “It’s bread, fried, and you take a bite, and there’s anchovy.”

The memory of the delicacy, apparently native to the Calabrian town Binetti’s mother left for Buenos Aires when she was eight, as well as the thought of its rapidly approaching appearance at the family’s table in Boca Raton, Florida, sparks pangs of hunger for the 32-year-old fashion designer, whose career is ascending. He grabs his stomach and shifts language gears. “C’ho un fame da morire.”

In the world of alta moda, Binetti’s linguistic capabilities have served him well. Thanks to spending his first 15 years in Argentina in an Italian family, he feels as comfortable among Cuban artists in Miami, where he attended the International Fine Arts College, as he does scouring the boutiques of Milan, where he later studied fashion at the Istituto Marangoni. Since his four-year Italian sojourn in the mid-1990s, Binetti has called New York City home.

But sitting in his showroom, located in his airy Chelsea apartment (the company’s offices are a few blocks uptown, in the Garment District), Binetti, a former design director for Jill Stuart, hopes that one day he can split his time between New York and Italy.

“One thing I love [about Europe] is taking the train, and going to any country. You can’t get that experience anywhere else in the world,” he says.

His dream may soon become a reality. Binetti showed his collection to Milan buyers in January and he is excited by the prospect of expanding his line, now available in about a dozen boutiques in the U.S., Canada, and Japan, with sales of $250,000 a year, to the European marketplace.

“Italian women are maybe more eccentric in fashion,” he says. “They’re like Los Angeles — lots of jewelry, lots of color. Maybe it’s because of their Mediterranean background.” He concedes that Milan, however, adheres to more of an Armani-esque philosophy, with classic lines and darker colors, dovetailing with the New York fashion sensibility.

His fall collection, bowing in Milan and then later back home, features sober yet rich colors — chocolate, mauve, and ochre, mixed with ice blue — and a more mature look, in keeping with his changing perspective as he heads deeper into his 30s. “She is a warrior, a pirate,” Binetti says of the woman who might wear his new line, “but still retains a romantic sensibility.”

Binetti often looks to art for inspiration — he cites Austrian painters like Egon Schiele and Gustav Klimt as the wellspring for a previous season. The Manhattan branch of the National Museum of the American Indian offered him ideas about beading and embellishment for his updated pirate look. “It makes it interesting when you can not only create something but also learn from it for your own personal life. I’m doing work but also doing something intellectual.”

Japan acted as muse for his spring collection: filmy chiffon dresses in pink, aqua and sea-foam green, with details like tassels and tiny sequins, neatly arranged on racks for visitors one rainy December morning. He termed a coral silk dress “Flowers of Gion,” after a district in the Japanese city of Kyoto. “I was reading “Memoirs of a Geisha” at the time,” Binetti explains.

As a child, Binetti counseled the women who sought his mother’s services as the neighborhood seamstress. “I’d be sitting there, selecting the beading for their gowns. I was always around.”

His mother still makes clothes for a handful of older women in Palm Beach, and it looks like Binetti’s career will last at least as long as hers.

“I’m going to die doing this,” he says, crouched on the floor surrounded by tracings of patterns and embroidery. “I need to be an explorer, a scout, finding what’s next.”