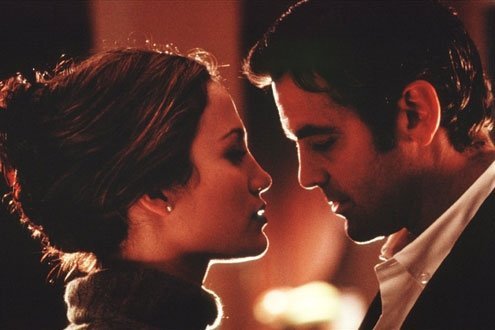 Jennifer Lopez and George Clooney in the seductive "Out of Sight."
H

Together they drink and stumble between lust and insult, then drink some more. Sex, not love, is the acceptable entertainment. Rourke and Dunaway are method-marvelous. They each perfect a eccentric horridness.

Schroeder, a big Bukowski fan, nails the Depression-era California bar scene — a literally inebriated state. Just how far you want to walk down this plank is up to you. It’s a well-acted nowheresville portrait adrift between black comedy and vomit.

Rourke really never escaped this role, not that he necessarily sought to. He was forever typecast a rough loser, making him at home in “The Wrestler,” which earned him a 2009 Golden Globe.

As for feeling at home, Steven Soderbergh was never himself after the gaudy Ocean’s franchise. To find his freshest work, you need to turn back the clock to the late 1990s. “Out of Sight” (1998) and “The Limey” are his best pure Hollywood pictures, “Sight” gifted with a can’t-miss electrical charge that sizzled back and forth between George Clooney and Jennifer Lopez (Entertainment Weekly voted it “sexiest film ever” in 2008).

Soderbergh takes career thief and con artist Jack Foley (Clooney, in peak form) and crafts a shifty, believable world that depends entirely on his connivances. The Elmore Leonard plot is a cat-and-mouse vehicle for the star duo (Lopez is U.S. Marshall Karen Sisco, a role she underplays deliciously).

Soderbergh crosscuts like a runner in the open field, patching together Foley’s prison breakout and Sisco’s chase, ensuring the intimacy between them heats up one burner at a time. Ving Rhames, Catherine Keener, Dennis Farina, and Don Cheadle all help out. The result a wonderful caper picture with a 1930s pedigree. It never takes itself too seriously. It cares that you care about the people it portrays.

The young Soderbergh seemed to enjoy lavishing dramatic and comic attention on a few ambiguous people. But the bigger the picture got, the harder it was to do. “Traffic” and “Contagion” dispersed more energy than they focused, the “Ocean’s” series was pure bling, “Solaris,” “The Good German” and “Side Effects” were clever but heavy-handed.

Watch the achingly seductive interplay between Foley and Cisco and you’ll see how Soderbergh can bring empathy to unlikely relationship. For Leonard fans, this is easily in the same league as “Get Shorty.”

In “Snatch” (2000), a “Lock, Stock…” knockoff, Statham is “Turkish,” who along with mate Tommy (Stephen Graham) get into Ritchie-style trouble when a rigged fight goes awry thanks to a wild Gypsy trailer park dweller named Mickey (a joyously incomprehensible Brad Pitt, who seems enjoy himself as he did in “12 Monkeys” and “Burn After Reading.”).

Turkish and Tommy are in big trouble with crooked promoter Brick Top (a grin-mashing Alan Ford) who likes feeding bodies to pigs. Ah, but that’s just a tender sidebar. There are diamond thieves (Benicio Del Toro as Frankie Four Fingers), ruthless Jewish jewelers (led by Dennis Farina, of all people), and a Russian mobster called Boris the Blade. Is it possible to spoof a spoof? Yes, but only when you turn film into cartoon. “Snatch’s” strength is its pokerfaced zaniness and lunatic language. There’s an organic madness to Ritchie’s criminal method, which puts the movie midway between satire and camp.

The movie may hold the “fuck”-a-minute record — spoken, that is. It also contains fabulous insight into male anatomy courtesy of one Bullet Tooth Tony (Vinnie Jones): “Now, dicks have drive and clarity of vision, but they are not clever.”