Diary of a Bad Year 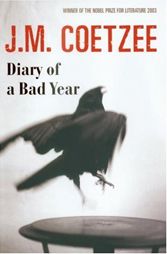 In “Elizabeth Costello” and “Slow Man,” Nobel laureate Coetzee tentatively attached himself to aging. Costello, a famous if disaffected novelist, sought meaning in her twilight. The narrator of “Slow Man,” elderly amputee Paul Rayment, fell in love with his cleaning lady before none other than Costello watered down his lust, demanding he act his age. In “Diary,” Coetzee gets past such tricky delays. He uses fiction to escape its confines. His narrator is septuagenarian “JC,” an Australian novelist who’s been asked by a German publisher to write trenchant essays for inclusion in a compilation called “Strong Opinions” — “the more contentious the better.” Attracted to Anya, a twenty-something upscale Filipino woman whom he meets in his Sydney apartment laundry room, JC asks her to type out his ramblings. She accepts bemused (while dismissively referring to him as El Señor or Señor C). Anya is an erotic force field, a bimbo to Señor C’s highbrow ramblings (“she thinks Kyoto is a misspelling of Tokyo,” rues JC.)

Anya is the kept woman of Alan, a chubby greed-is-good consultant who lives upstairs. The subversive set-up serves Coetzee well. With Anya as a skeptical foil, JC can honor Tolstoy and Kurosawa while bemoaning George W. Bush, John Howard, Guantanamo, and the disservice done to animals (his late-life crusade). Gradually, though, the old man’s ramblings begin to engage the younger woman and enrage Alan. Inevitably, there’s a collision.

But much of this (indeed, the novel’s “success”) is beside the point. What matters is Coetzee relentless breadth of insight. He disdains government “meta-rule” and the collapse of honor. “Democracy does not allow for politics outside the democratic system. In this sense, democracy is totalitarian.”

Señor C is all Coetzee — there is no allegory, no curtain. He is a South African-born “novelist and critic” who wrote a book called “Waiting for the Barbarians.” Señor C’s predicament is an embellishment of the novelist’s own. But a Coetzee “bad year” is worth a less lucid mind’s ruminative lifetime. The novel is written “horizontally” — with JC’s, Anya’s, and Alan’s vantage points overlapping laterally, like footnotes. “All old folk become Cartesians,” writes JC. Yet not all old folk can successfully be what they think. “In the present ‘culture,’ few care to distinguish — indeed, few are capable of distinguishing — between sincerity and the performance of sincerity.” “Diary,” in praise of ideas, is incomparably majestic.