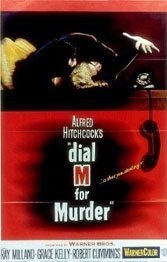 A husband who knows his wealthy wife has had an affair enlists a con man to kill her. The uncomplicated premise is all the fuel Hitchcock needs to construct a textbook crime-gone-wrong thriller. Thanks, that is, to masterful pacing and a deft performance from Ray Milland as a greedy, cuckolded husband.

Milland is Tony Wendice, a former tennis pro who’s packed it in to live a comfortable London life with his rich, doe-eyed wife Margot (Grace Kelly). When he finds love letters between Margot and American mystery writer Mark Halliday (Robert Cummings), and knows Mark is visiting London, he hires an outsider to follow through with a murder plan whose success depends on a series of chess moves. As most mystery writers know, visiting Mark included, the perfect murder is perfect until the unforeseen interferes. And that happens here. Margot stabs and kills her assailant.

Controlling, shifty-eyed Tony tries covering his tracks, which is when the film, from Fredrick Knott successful play (and screenplay), acquires its wry theatrical elegance. As a chief inspector Hubbard (John Williams) peels layers from the onion, the trail appears to lead to unfaithful Margot. The botched murder suddenly seems on the verge of turning into the perfect frame job. But managing the last few details are the hardest, particularly as Mark grows suspicious and Hubbard starts following the money.

Villainy has rarely gotten a more suavely accomplished face than the one Milland puts to Wendice, a husband above reproach until the many walls of blackmail come tumbling down. The final scene is old school to the core, reminiscent of the World War I days when shot-down pilots saluted their conquerors as their planes began their downward nosedive.