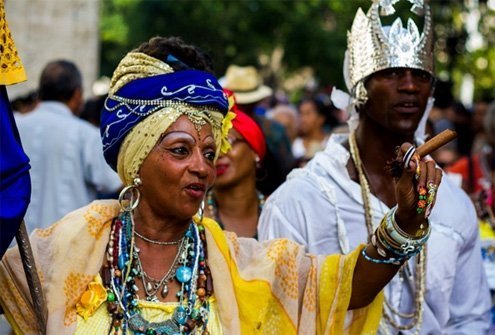 bservation without introducing context often leads to a cul de sac. The absence of context generates a comprehension barrier that literally blindfolds the observer. They watch without seeing.

That’s what might have happened to the Frenchman León Beauvallet when he described a scene he witnessed during 1856 Día de Reyes festivities in the streets of Havana that included a black man he described as wearing “a genuine costume of a king of the middle ages, a very proper red, close coat, velvet vest, and a magnificent gilt paper crown.”

“This Negro,” he continued, “gave his hand gravely to a sort of feminine blackamoor who represented some queen or other. He walked by her side with a deliberate, majestic step, never laughed and seemed to be reflecting deeply on the grandeur of his mission to this world.”

This annoyingly condescending tone towards blacks was a common trait of the literature of the time. From Beauvallet’s perspective, which is rife with racially derogatory terms, the man he’s describing has no remarkable mission in the world. He’s a clown.

So why is it that such piece of writing deserves attention today?

The answer is contained in two important words: clueless observation. Beauvallet’s words are a perfect example of it. They show how a hegemonic cultural system is eventually undermined by the very structure it attempts to create.

Though poor Beauvallet couldn’t have known it, blacks in urban areas of colonial Cuba, usually belonged to associations known as Cabildos de Nación. Cabildos were ethnic associations that brought together Africans who lived on the island and their descendants, in careful accordance with their culture of origin. In colonial Cuba, both slaves and portions of the large population of free blacks and mulattoes belonged to Cabildos. Their existence allowed members of the most widely represented African cultures in the island — including Yoruba, Arará, Bantu, Carabalí, and Mandinka — to reunite regularly with their fellow tribesmen, at a specific Cabildo designed for that very culture.

The peculiarity of the African experience in Cuba was how it allowed for “homeland” cultural continuity. The Cabildos were social gatherings. Its members got together for musical performances and dances, which even slaves were usually allowed to attend. There were an estimated 80 Cabildos active in 19th-century Havana.

But their existence didn’t make the practice slavery any milder. Authorities tolerated Cabildos for the same reason that allowed for Día de Reyes festivities. They believed giving slaves a “free” day was a safety valve against the building up of social tensions. But it didn’t make human bondage less horrific.

Cabildos had their own internal social structure, with a king and a queen. Though the titles were obviously non-jurisdictional, they had tremendous social and psychological impact on individuals who, while living in bondage, could nonetheless cultivate their cultural identity. The couple Beauvallet observed (and mocked) as they walked side-by-side was very likely a king and queen of a Cabildo, two figures with a distinguishing social function in their community. By dressing as a “king” and “queen,” they mimicked the European concept of monarchy, inventing the idea of an African ruler and his spouse. Though the mimicking was a clear product of colonization, their roles in Cuban society were no less powerful.

The persistence of traditional African religions in Cuba is a legacy of how the Cabildos system encouraged social fraternity among Africans and their descendants. Cuban music, deeply influenced by African rhythms, is a perfect example. Though subjugated and forced to embrace Christianity by hegemonic Hispanic culture, Cuba’s Africans their descendants also managed to uphold traditional spirituality, often concealing it under Christian symbolism.

Ruling whites repeatedly made fun of “ignorant” Africans who “constantly confused” their own tribal deities with Catholic saints. These clueless observers failed to see that their slaves were actually setting the cultural basis for the religious syncretism that has characterized the island for centuries.

Renown Indian scholar and Harvard professor Homi Bhabha, who has developed the concept of “colonial mimicry” in his studies of postcolonial theory, explains colonial mimicry as a “desire for a reformed, recognizable Other, as a subject of a difference that is almost the same, but not quite.” In layman’s terms, the colonizer typically seeks to “civilize” the “other,” trying to ensure the “other” resembles him while making sure that he (or she) always remains “inferior.”

This situation partly explains why Spaniards were generous in giving slaves the opportunity to socialize. While slaves had been christened, they remained an object of derision. They were a disciplined “other,” normalized enough, but still different enough.

But as Bhabha brilliantly points out, such “mimicry” can also introduce subversion, because the inviting cultural imitation (instead of encouraging freely negotiated cultural exchanges) can eventually undermine the power of the colonizer.

Enslaved and abused, mocked by as a ridiculous black king and queen on Día de Reyes by an outsider, these men and women stubbornly and resiliently maintained their traditions.

Today, Havana celebrates Día de Reyes in homage to Afro-Cuban ancestors. If you ask me, I think Africans won that battle.