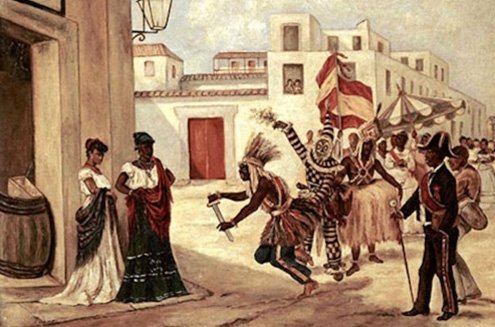 On Día de Reyes, passing fancies of emancipation.
I

magine yourself wandering the streets of Havana on January 6 of any year throughout the 19th-century (or, to be precise, any year prior to 1886, when slavery was finally abolished in Cuba). If you were a foreigner and a first-time visitor with little or no knowledge of the surrounding cultural and social milieu, you might think yourself caught up in the American continent’s worst 19th-century nightmare: the slave revolt.

So there you are in Havana on January 6. Crowds of black people, apparently former slaves, fill the streets. They wear masks and multicolored customs. They dance, scream, play music, and sing to celebrate their (apparently) newfound freedom. You feel joyous at their liberation or frightened at the intensity of the agitation, or a combination of each.

Now imagine waking up in Havana on January 7. You’d rub your eyes in disbelief when you realized that the black folks who had been so fervently celebrating their freedom the previous day had been returned to their life bondage.

In colonial Havana, January 6, the day of the Epiphany, known as the Día de Reyes (Three King’s Day), was traditionally given over to subversion.

In accordance with Article 88 of the Havana Slave Law, on that day and that day only slaves were considered free by law. Any master attempting to force a slave into work risked a fine. From dawn and until 4 p.m., the streets of the city were open to celebrations and performances. As a result, Havana was overrun with a cornucopia of colors and sounds, masked faces and disguised bodies.

Visitors were typically surprised, if not startled. Lucien Biart, a French scholar and prolific travel writer who found himself in Havana on Jan. 6, 1863, couldn’t conceal his amazement. In his volume “Across America” (À travers l’Amérique), Biart, a devoted abolitionist, vividly described his fear when mistook Día de Reyes festivities for a rebellion. In a crescendo of surrealism, his narrator grows increasingly uneasy. He asks local people what’s unfolding before him and is told that the slaves are free (technically true on that day).

The Frenchman is stunned. He imagines warfare.

“Have there been many casualties?!” he asks, and “Where’s the Governor?!”

The governor, reply the placid residents, “is sleeping.”

“Sleeping!” cries the disconcerted narrator. “He must have been killed in his sleep!”

Continuing his enquiries, Biart is again informed the slaves are free. He’s advised to stop walking through the streets, since three people have already died. That’s not such a bad number, his informants continue, since the previous year eight people died. All in all, though, he shouldn’t worry. All of which only deepens Biart’s bewilderment.

“Are you telling me that there was another attempt of slave rebellion last year?!” the Frenchman asks helplessly.

At this point the “misunderstanding” is explained.

No one will ever know if the locals were merely mocking Biart. What’s very clear, however, is that the carnival-like event produced a high level of ambivalence and innuendo. Prominent Russian critic and language philosopher Mikhail Bakhtin used the word “carnivalesque” to describe occasions during the celebration of medieval carnival in which mainstream political, legal and religious norms were temporarily overturned, providing a liberating if evanescent moment of relief. “Carnivalesque” perfectly describes January 6 in colonial Havana, a day in which the liberating forces of subversion briefly opened a window to freedom for those in bondage.

Yet because of its fleeting nature, the residents of colonial Havana saw the events of Día de Reyes as means of reinforcing the existing order. Permitting subversion functioned as a safety valve to allow the release of pent-up disenchantment, leaving the status quo untouched. In fact, Cuba was the second to last nation to abolish slavery in the American continent — the last was Brazil in 1888.

Another description of Día de Reyes, contained in León Beauvallet’s 1856 “Rachel and the New World: A Trip to the United States and Cuba,” while rife with condescension, offered a snapshot of the day’s cultural folklore, and with it of African cultural resilience in Cuba.

“I saw [a black man],” wrote Beauvallet, “with a genuine costume of a king of the middle ages, a very proper red, close coat, velvet vest, and a magnificent gilt paper crown. This negro (…) gave his hand gravely to a sort of feminine blackamoor who represented some queen or other. He walked by her side with a deliberate, majestic step, never laughed and seemed to be reflecting deeply on the grandeur of his mission to this world.”

While Día de Reyes may not have served as a call to arms let alone produced immediate transformation, the day was nonetheless of fundamental importance in the long run. It allowed the assertion of traditions and customs slaves had carried with them from Africa to Cuba. And some of these resilient customs would outlive slavery itself.

— Editor’s note: This is the first of a two-part series. Part two will appear in January.