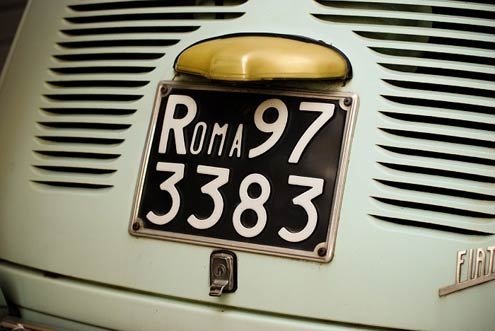 Before the European numeric went into effect, all cars had Roma-labeled plates
A

driano found the postcard abandoned on Corso Vittorio Emanuele in central Rome. The neat printing caught his eye. So did the English, which he deciphered deliberately.

“Dear Grandpa,” the lost postcard began. “Ciao, mio nonno. Come sta? ‘Hi, Grandpa. How are you?’ I miss you so much. I can’t wait to see you in January. Maybe we can go shooting together at the range. Italy is incredible, but I miss home. Today we learned all about the evils of Berlusconi. There are dogs everywhere, and only small cars. There is an absence of large boats, guns and trucks. Ci vediamo! Ben.”

The lost postcard tickled Adriano. Since the address had already been written on it, he bought a stamp at his tabaccaio and sweetly popped it into the mail. But not before Xeroxing a copy, which he showed to me.

“Vedi questa cosa!” he said, laughing. “È troppo carino. Ma non ho capito bene — ‘shooting’?” He wasn’t sure if he’d understood correctly. Did Ben in fact look forward to going home to shoot guns with his grandfather? Adriano mimed holding a gun and blasting it at the shelves. “Cosi?”

“Mamma mia,” he said, shaking his head, his eyes dancing. “What a strange country you have.”

Of course, I don’t have one strange country. As an American in Italy, I have two.

Nearly every time I meet an Italian, the same thing happens. Once they get past their surprise that I’ve moved from my origins “near” New York (“che bellllloo,” they always exclaim), they look at me and fidget. I know what’s coming next. “And so,” they’ll urge me, shyly, “be honest. What do you think of Italians? La verità?”

At postcard length, it’s an impossible question. What do I think of Italians? Which Italian-the guy who shoved me aside on the packed bus this morning without a “scusi,” or the Calabrese vendor at who lavished me with gifts of oil and peppers when I stopped by his stall at Porta Portese soon after?

Like the American postcard-writer, I end up harping on little details.

Sometimes, I want to tell anxious questioners about the young Italians I’ve met who despite work shortages and the bureaucratic nightmare of starting new endeavors in Italy, are still trying to get new businesses off the ground. Or about a Roman friend who moved to help her mother with their agriturismo, on the border between Umbria and Tuscany; they both work long hours running the farm, cooking, welcoming guests, and shuttling clients around, even planning and designing and opening a new property. At the same time, they make the time to play with their big chocolate labs, show you what new produce is growing in their organic garden, and drink wine with you under the stars. I doubt “stress” is even in their vocabulary, and I bet it’s by choice.

I want to tell them about the day I paused to drink from one of the nasoni (street fountains) on Via Giulia and a tiny old woman stopped her stroll to complain to me — in that amicable way Romans have of complaining to start a conversation — about the endlessly gushing fountains. What a waste of water, she told me. Other cities, cities like Paris and London, would never do such a thing. After I’d agreed and smiled a few times, she picked up on my American accent. “Ah, ma non sei italiana!” she said. “Ma che carina sei. Di dove sei?” From the United States, I told her, but I lived here. When I told her I was a journalist, she threw her hands in the air. “Oh,” she said, “could I have your number? There are always things going on here and I would love for someone to write about them!”

Neither of us had a pen, but she lived right across the street, she said, as her family had for generations-hence her name, Giulia. I followed her into the courtyard of a regal and faded palazzo, where she grabbed a pen from her apartment and I wrote my phone number down for her. As we walked back out together, another elderly lady was getting into a car. Giulia introduced us, as if I were a long-lost niece, and then clasped my hands.

“Well, the next time you’re in the area, please drop by,” she said earnestly.

When I think of how I feel about “Italians,” I think of Giulia, and the women at the agriturismo, and my Italian friends. Their stories don’t fit neatly into a 20-second question-and-answer slot.

So instead, I usually smile. “I love Italy,” I tell those who ask. And I leave it at that.