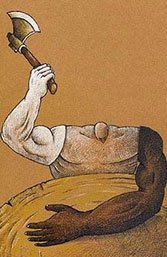 A niggling feeling of discomfort.
I

can’t have understood the man correctly. “Mi dispiace,” I say in my limited Italian. “Can you say that again?”

He nods. “C’e una persona di colore qui?” he asks. Is there a person of color here?

It’s 8:30 am. I’m standing at my window, my hair uncombed, about to practice yoga before my day begins. I hadn’t meant to lock eyes with the man working on the terrace outside, but I did — impossible not to in the close quarters of a Rome palazzo, where my open shutters practically clap into those of the apartment next door — and said hi.

For a few minutes, we made chitchat. The man was doing work for his daughter on her terrace; she’s lived here for several years; the project will take several weeks. The whole time, I nodded and queried and replied, feeling fairly proud of my comprehension. Until he threw this phrase at me. Una persona di colore. It was a culture-curveball of the sort I’d learned to expect, but not in my own home.

After all, he couldn’t have meant, literally, a “colored person.” In the half-second I had to try to come up with an alternative definition, my mind raced. Was it slang for something? Had I misunderstood? But then I realized that I hadn’t misunderstood. He did mean a person of color.

The polite expression on my face froze as I struggled to keep it from slipping toward eyebrow-arched shock. Well, I told myself, the English translation sounds archaic, but maybe that’s what they call minorities here. Not everyone has to be politically correct. Fine.

But then — and this is where I got a niggling feeling of discomfort — why was he asking at all? What did the question matter?

As my brain churned, I began rambling. “Well,” I said, “yes, my friend was visiting last week, and she’s half-black…and, oh, I guess my roommate, he’s Sri Lankan, so his skin is darker, too… and my friend is visiting next week, and he’s African-American…”

I smiles to try to hide my own confusion. But he mistook it for an apologetic smile. “Oh no, non è un problema,” he said. It’s not a problem. (I’m sorry, I wondered, in what circumstances would it have been?) It’s just, he continued, that the carabinieri came the other day.

Now, along with confusion, the heat of anger began flushing my face. “Oh, yes? Perchè?”

He shrugged and again mentioned “una persona di colore.” I didn’t want to assume he was saying what I though he was saying, so I tried to clarify. “Is it because of my roommate?” I asked.

He shrugged and thrust hands in the air, palms up. “Non lo so,” he replied, in the tone of voice that said “I don’t know, and I don’t want to say it, but really, what else could it be….” “Non lo so.”

I lookws at him, open-mouthed. He shrugged again, this time more elaborately, and raised his eyebrows at me.

“Well,” I said, stumbling over my words, “that’s ridiculous. Just so you know, he lives here.” He’s also a consultant for the United Nations, I wanted to say, working a 9-to-6 job with the World Food Program, and he was born and bred in Sydney, Australia and has little connection to Sri Lanka at all, and he has a master’s degree in international relations, and if you saw him in the palazzo it must have been on his way to work or the gym — such devious activities!

That, and so much else, threatened to spill out. After which I became instantly annoyed at myself for having even entertained the notion that I should be trying to defend him. For what? The color of his skin?

So I pressed my mouth into a terse line that could have been mistaken for a smile. And when, later, my roommate excitedly showed me the carta d’identità that he had just received, within two months of moving here — the Italian-bureaucracy’s equivalent of gold dust, issued only to the most upstanding of residents with an employer to match — I said, “Oh, cool.”

“Apparently it’s a few thousand dollars if I lose it,” he told me, visibly anxious.

“Well, just don’t bring it around with you,” I said, glibly. “I mean, you don’t even drive, so when would you need it? It’s not like they’re going to stop you for anything. I’ve been here for almost a year, and I’ve never had my documents checked.”

He fingered the priceless lamination of his legal status and returned it gingerly to his wallet. “Actually, I was stopped twice when I was moving to this apartment,” he said. “On the same day, by two different police. I had all my bags with me and I guess they thought it was suspicious.”

It hit me: He might have a carta d’identità, but to police, and to Italians like my neighbor’s father, my skin color, and heritage, I’m one of them. Unlike my roommate. No matter how legal the status of a Bangladeshi, a Sri Lankan, an African, no matter how well he or she speaks Italian or makes a carbonara, they’ll be the suspicious ones. The stranieri.

From the shrug he gave me in return, I could tell that in Italy, at least, he was used to it.