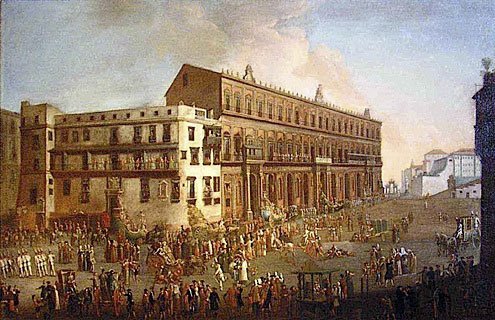 Detail from Naples "Carnevale," 1774, by Alessandro D'Anna.
I

recently succumbed to one of my compulsions. It was neither the shoe nor the glove nor chocolates — whose only payback are bank-statement dismay and knee-jerk restraint. No, from the new-books table in the library I picked up “The Lady in the Palazzo” by Marlena de Blasi, yet another book about a “foreigner’s” experience in Italy.

Such books make me into the kind of woman who doesn’t learn from her serial attraction to the wrong sort of man. The formula is typical. “Foreigner” seeks mid-life relief in Italy. Foreigner has confident but weak grasp of Italian (which editor doesn’t check). Foreigner gets mawkish over food. Foreigner encounters natives. Natives are both delightful and irritating, simple sibyls who reveal eternal truths that help foreigner discover self. Foreigner falls for improbable and problematic (a.) home and/or (b.) Italian. Foreigner experiences epiphany; either (a.) sudden surge of feeling integrated or (b.) realization that he/she never will be.

Except for Tim Parks (a genius anyway) and pure travel literature, you’d be surprised at the persistence of the pattern.

De Blasi’s book does contain writing I wish were mine. As an American woman, I root for her tough little heroine who makes a life on her own terms and travels with a trunk of versatile fabric worthy of Scarlett O’Hara.

At the same time, I wonder if I live on the same peninsula. I’m not bitter or envious, but my Italian life (far from de Blasi’s fiction) is honestly more in tune with that of my American friends’. There is family and work; there are carpools. Maybe I dress and eat better and can go to La Scala on a bike. But my noble-named Italian friends dress normally, hold down jobs and well-maintained, fresco-free homes. The eccentrics I seem to collect come from all over. I do know faded aristocrats busy selling off heirlooms — but they’re American. My Midwestern neighbors peddle as many eternal truths as my “simple” Italian friends.

Where do these visions of Italy come from? What compels these authors to knit the certainly veracious bits of their Italian experience into these predictable and romanticized narratives?

Per fortuna, my next book was Tommaso Astarita’s “Between Salt Water and Holy Water: A History of Southern Italy.” Naples-born and raised, Astarita teaches history at Georgetown University. Specialists say this book needed to be written. As a non-specialist, I can’t imagine it done better.

Astarita’s writing is orderly, precise, and colorful; rare enough for an Anglophone academic, miraculous for an Italian one. He combines the “traditional” — dates and battles — with “popular” history. He untangles dynasties and alliances (the Two Sicilies, Wars of the Spanish Succession anyone?) and illustrates popular music, theater, street and religious culture. He tenaciously and wittily follows his themes; no political analysis is complete without consultation of San Gennaro’s blood. (We also learn that Messina’s relic Letter to the Virgin “sadly survived only in later translations”).

With most of the conflicts in Southern Italian history still festering in contemporary Italy, there are many potential axes to grind: Right, Left, elitist, populist, Marxist, Catholic, secular. Astarita grinds none. But his impartiality is not detached. His book is warm, even affectionate. Astarita is partial to Naples, which reflects both fact — its political, economic and cultural domination of Sicily and the South — and his love of his native city. He is a worthy heir to the enlightenment intellectual figures Giambattista Vico and Gaetano Filangieri, whom he admires for their intellectual stature and “profound humanity.”

Astarita often illustrates contemporary Italy obliquely, without explicitly mentioning contemporary politics. For example, he describes the confraternities and guilds that for centuries acted simultaneously as trade unions, welfare and social groups providing Neopolitan commercial classes (from professionals to laborers) with identities and political power along with pensions, funerals and dowries.

Their statutes were also explicit codes for private and business morals. They lost out to one of the paroxysms of reform — usually more damaging than healing — that have periodically undone the South. What does this void, since unfilled, say about Italy’s self-righteous trade unions or its weak civic sense?

Astarita also helps explain the matter of Italian mystique that de Blasi’s work elicits. For centuries, visitors to Naples looked at the city as a window to the South — which was a “Paradise inhabited by devils.” For foreign outsiders, popular culture and general backwardness was imbued with charm. “The backwardness of the South,” writes Astarita, “was closely linked to its picturesqueness, and [thus] afforded an aesthetic pleasure.” Like today’s visitors, the Romantics felt Southern “savages” had “special links” to the natural and ancient worlds; links that were severed along the path of progress. Italian sentimentality begins with the South.

Thankfully, Astarita lucidly takes apart preconceptions of schmaltz and squalor. His book does what the best non-fiction should do; inform, correct and incuriosire.