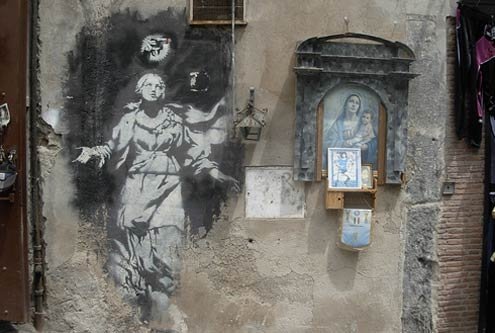 aples has always held some sort of morbid attraction for me. I have wanted to go there since I arrived in Italy two decades ago. Last week, I finally did.

Driving me was the same compulsive mix that had once led my ancestors across the Atlantic to the United States, and further west, and that later propelled me to Italy. It was the desire for a challenge, a talent for adversity, and a fascination with what I feared most, namely disorder, moral laxity and egotism. If Italy was my new Frontier, then Naples was its Fort Apache, its extreme and wildest outpost.

Frontier analogies aside, my idea of Naples came straight out of 18th- and 19th-century writing and art alongside neo-realist Italian films of the 1940s and 50s. In my imagination, Grand Tourists in velvet and powdered wigs strolled the city, purchasing antiquities newly unearthed from Campania’s lava. In my vision, a friendly plume of smoke rose from Vesuvius’ verdant slopes, just as it did in pastel-colored gouaches painted for traveling lords and ladies. The backdrop was urban decay in the soft; gray tones of old prints that depicted gently crumbling temples and triumphal arches. Friendly dogs scratched and rooted among the picturesque ruins, while quaint figures from the commedia dell’arte plied curious trades.

The post-war celluloid version was not much different. The grey tones of film replaced those of ink and paper. Similar commedia dell’arte figures, now blessed with movement and voices, filled the frames. They swore, sang and procreated amid stone, rags and peeling paint that World War II hardly altered.

According to a saying already current in the 18th-century, Naples was a “paradise inhabited by devils.” My Naples excursion of the mind saw me accompanied south by my Milan-dwelling Neapolitan friend (I’ll call him the Duke). I walked tall among grinning little Satans who dared not approach me with the Duke at my side.

The Duke is a lot like the city where his family has lived since at least the year 800. His humor is irrepressible. He is handsome and elegant with a vulgar streak. His appetites are earthy and proletarian. He is keenly intelligent but intellectually lazy. While dismissive of others’ opinions of him, he is also permaloso, touchy. A descendant of prefects and princes, he now just gets by. He veers from depression and self-pity to urbane sociability. He can spend a weekend alone behind closed persiane and then emerge and keep a dinner-party spellbound. He squanders his potential royally. His difficulties are someone else’s fault. Disorder, failure and sadness can be blamed on the Bourbons, the North, the Camorra, Naples’ poor, Naples’ aristocrats.

Sometimes the Duke is in my life and sometimes he’s out of it. At the time of my Naples visit, he was out.

While art may have prepared me for the low points of old Naples, the street-level hovels and disorder, I wasn’t ready for the post-war concrete sprawl that spreads along the bay and climbs up the sides of Vesuvius. I imagined the organic trash of two centuries ago. I saw modern trash, which is plastic and metal. Vegetation defaced Naples’ buildings in the 18th-century. Now it’s purple spray-paint (including “Nando t’amo” on Santa Chiara’s gothic façade.)

Amid these demoralizing sights, I noticed I’d missed a call from the Duke. I was startled. I hadn’t heard from him in months. Did he know I was in Naples? He didn’t. But the next day, checking in from Milan, he followed me with calls and messages. He told me where to go, where to eat, what to see. Where was I? What was I seeing? Send me a picture of the view! Have tea with my sister!

Though his physical presence might have been a relief, his calls only underlined my unease with the rawness of his city. I fell back into my vision. Had he been with me, I could have ignored the tacky tourist bits. He would have saved me from struggling to find the appropriate banter to scatter tour-guides and cameo-sellers. A few pungent words of his in Neapolitan would have sent the touts packing. He would have set the restaurant straight when it served a salad of Iceberg lettuce and mozzarella di bufala that was rubbery and pizza topping-like.

He would have shared my enchantment with the mosaics and classical sculpture in the Museo Nazionale di Archeologia. He would have been as delighted as I that the Roman sculptures of dogs were exactly like the creatures I saw flopped in Pompeii, guarding bars and shops or frolicking in the Piazza del Plebiscito.

All day, I tried to assuage my mounting agitation. I stopped answering his calls. I did not have tea with his sister. Instead, I went to a concert in the historic San Carlo Theater with pianist Aldo Ciccolini playing Mozart. It should have been sublime-a Neapolitan playing the only composer who could capture the city’s mix of humor, melancholy and manmade beauty. But I couldn’t savor it, even if I told myself I should.

Naples had rattled me. I had looked face front at what I feared most and it did me no good.

I woke up at 2 a.m. and couldn’t fall asleep again. I decided to cut my visit short. The Capodimonte museum and the porcelain I had wanted to see for decades would have to wait. I wanted out. I wanted to go home to Milan. There I’d be safe.

Unable the change the flight, I booked an early train. In the taxi to the station, I saw the crisp blue sky over the bay. Dogs cavorted in the morning sun on Piazza del Plebiscito’s cobblestones. Had I made a mistake?

But as the train headed north, my anxiety receded and the real Naples and Duke slipped quietly back into the soft tones of my imagination.