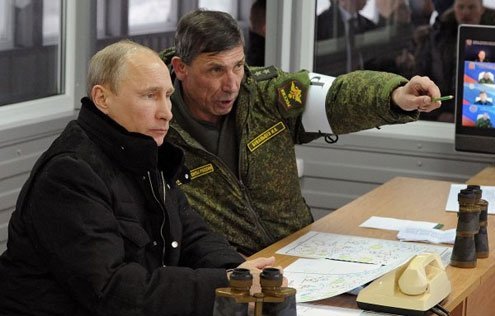 Putin and Crimea: not as premeditated as some pundits suggest.
T

he dogs of war and the words of war can chase each other’s tails. That was certainly the case in August 1914, when London dailies whipped up a rhetorical frenzy on par with the fierceness of the war to come, and which they helped generate. Crisis induces rhetoric. It always has. Passion’s clockwork is unreasonable by nature.

That said, let us momentarily backtrack, and also oversimplify.

In December 2013, Ukrainian President Viktor Yanukovych — elected in 2010 after several previous terms as prime minister — formally announced what all knew already: that he would turn away from his country’s European Union path and cozy up instead to Russia, the country he favored, and which was also in a position to provide energy supplies and economic assistance.

That decision, seen as a betrayal and a sell-out by the country’s pro-European urban population, massed in Kiev, set off the latest in a wave of fierce street demonstrations, some resulting in casualties.

The protests diminished, and then ceased altogether, over Christmas, when Yanukovych announced the deal he’d reached with his manipulative Russian counterpart, Vladimir Putin. Russia would slash natural gas prices and provide billions in economic aid to keep Ukraine solvent. The pact displeased, even horrified, EU supporters, who sensed Putin had pre-empted their Western push with what amounted to a payoff.

At the same time, the deal made sense on paper. So much so that the Kiev protest movement was briefly neutered and forced to regroup. That it did, until February.

Early that month, a new wave of anti-Yanukovych (and de facto anti-Russian) demonstrations began, these met more forcibly. Yanukovych, determined to avoid a repeat of December, ordered police to fight back, which they did ferociously. Fistfights turned into gun battles, transforming parts of the Ukrainian capital into capsules of conflagration. The uncompromising intensity of fighting was made evident by the mounting death toll.

Suddenly, both the West and Moscow were again on alert. While the former supported the spirit of the protests, it feared reprisals, bloodshed, and worried — rightly — about lack of coherent organization among the dissenters. Moscow, convinced the worst had passed, was again confronted with a Ukrainian presidency in obvious peril. Yanukovych, the man with whom they’d signed a vast deal, was again on the ropes. Worse still, at least from the Russian perspective, the protestors, regardless of provenance, were de facto pro-Western, which potentially endangered all of Russia’s Ukrainian interests, including its Black Sea enclave.

This was the moment of truth.

Yanukovych was under siege, with only two possible responses, neither attractive. The first was to mobilize the army to neutralize the protests — or attempt to, a move that would produce even wider bloodshed. But Yanukovych did not give such an order. The second was to backtrack further, but Yanukovych had run out of concessions. He’d ordered a cabinet reshuffle, dismissed key officials, and promised snap national elections. Had the lethal street fighting not pushed the dissenters well beyond the point of no return, these moves would most probably have been sufficient to restore barebones democratic order. But democracy was already off the rails. The more militant protestors, bloodied but unbowed, sensed the kill. The emotional street surge intensified and soon the palace was surrounded, leading to Yanukovych’s flight.

From that moment on, all bets were off, as they remain now.

Based on this incendiary evolution, a critical question deserves asking: would Putin’s Russia have moved to seize Crimea, dominated by ethnic Russians, had the situation in Kiev appeared more balanced, or potentially balanceable? Would Putin have mobilized his longstanding Crimea base and rallied supporters to protect his vision of the “realm” had he still been dealing with some semblance of rational leadership in Kiev, even with former Prime Minister Yulia Tymoshenko — no enemy of Russia — as an interim figure?

The answer is no. He would not have. It was not in his plans, and the worst kind of public relations, particularly after the successful Sochi Winter Olympics.

So long as Yanukovych remained in power, or even faced with the prospect of a change in Kiev leadership (including the temporary and hypothetical re-elevation of Tymoshenko), Putin would not have taken what is and remains a risky step. Instead, what he saw before him, and what others saw also, was profound instability in a border nation. It was then and only then that he decided to respond based on his own set of rules, since those in play seemed either suspended or invalid.

He did not invade Ukraine in the hardcore way that word usually suggests. Instead, he moved, illegally but logically, to secure a vital military base in a region largely friendly to his efforts and his cause. There was no frontal attack, no looting, pillaging, bombing or gunfire. His “aggression,” as the West now bills it, was hostile to Ukrainian sovereignty, yes, but otherwise relatively benign.

The non-attack attack was not a long-awaited “evil empire” move presaging the first of similarly staged efforts intended win back Russia’s territorial empire. Those days are gone and such an enterprise is now impossible. Nor was it pre-emptive, premeditated act lying in wait for an event-related trigger. Had that been the case, Russian ground troops would already be involved (and may yet come into play, a self-fulfilling prophesy, given the escalating rhetoric on both sides).

Notwithstanding these circumstances, rife with ambiguity, intelligent, well-informed British and American columnists, reverting to their pre-Iraq form, are busy assigning all manner of untoward adjectives to Putin’s behavior, as if one-upmanship and competitive juices hadn’t ended with Sochi — where Russia annoyingly won the most medals. Many of these sure-thing comments are, to use the very Western phrase, “amped up,” mimicking the ever-agitated flavors of social networking.

Some mention the Nazi attack on Czechoslovakia in 1938, in which Hitler seized, and later annexed, the German-majority Sudetenland, never retreating from his position that he’d made the move to defend persecuted ethnic Germans. Others compare Putin’s Crimea move to Soviet leader Leonid Brezhnev’s ill-fated invasion of Afghanistan in 1979, a massive military advance whose catastrophic outcome all but condemned the Soviet Union to a slow death. Still others see Putin as hell-bent on giving Europe and the United States a comeuppance — a view fueled by Putin’s singular machismo (a kind of imperious self-assurance the West actually admires so long as its values are embodied by one of its own). A few note “the tiger of quasi-religious nationalism, which Putin has been riding,” a reasonable enough assertion since Putin has long stoked the embers of imperial nostalgia. Extremists — and most in the West are influenced by Putin’s repressive “Pussy Riot”-flavored policies — are determined to see him as war criminal in utero who, having failed to “strong-arm Ukraine into rejection of the [December] deal,” is now meddling in Ukraine as Stalin once did, thus betraying “grotesque amnesia” (except that Ukraine, better or worse, was then part of the Soviet experiment).

Finger pointing aside — and both sides are motivated — the West’s quicksilver indignation, though often earnest, simply doesn’t reflect the week-to-week and month-to-month realities as they gradually unfolded in a country that has been matching wits with Russia for two decades.

Again — and it bears repeated mention among offended democrats — Yanukovych was not a stooge but Ukraine’s elected leader, disliked by many but nonetheless four years into legal term. Faced with the deadly protests, he had agreed, albeit reluctantly, to review the Moscow deal; to a reshuffling; to early elections. At the moment of his ouster, he had all but capitulated to the demands of a rowdy and eclectic opposition. But that opposition ultimately refused to let the capitulation play out, preferring the satisfaction of immediate redress for its street losses.

When the opposition took control of government buildings it overstepped actual or putative democratic dissent and triggered an event that was tantamount to a coup. Though a coup can be applauded, and its political target — in this case Yanukovych — blamed for inciting its makeshift plotters, it is no less a coup.

Russia responded only when that self-same coup had run the first part of its course, leaving Kiev in the hands of no one Moscow knew to deal with.

As certain as the West is of its moral high ground, and as confident as it is in the profound rightness of its contempt for Putin, action cannot arbitrarily be removed from reaction. Yet the West, rudely backed into a corner by Putin, is perpetrating just such an unruly disconnection, thereby adding another layer of irrationality to a situation that spun out of control the instant Kiev protestors decided to extract full-scale revenge for the dramatic wrath brought to bear again them.

After which Russia, uninterested in their fate, invested only itself and its goals, acted on its own behalf.