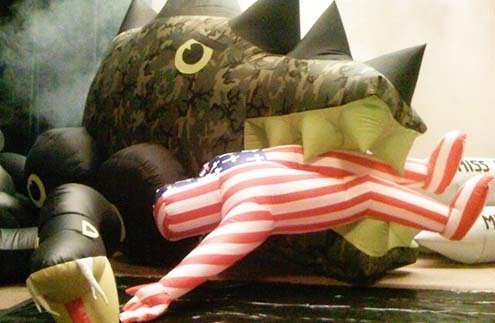 onald J. Trump, president of the United States. You can run from it, go canoeing, or listen to your favorite escapist music. You can move to a foreign country or hide under your bed.

Or, if you’re lucky, you can be in the company of the performance artist Pat Oleszko and realize that doubling down on engaging the demoralizing world around you is the right path, if not the only one.

I’ve known Oleszko for years. She’s a dear friend. But more important, she’s also a performance artist who in my eyes qualifies as a force of nature. With the improbable goings at the Trump Tower and in Washington, D.C., her work has never seemed more relevant.

Basically, Oleszko makes a daily “spectacle of herself” — her words. When she leaves her New York City apartment she’s invariably decked out in eccentric and colorful outfits of her own making. She assaults any traditional look, undoing commonplace thinking as a matter of course. She calls herself “a maximalist, a sculpture of ideas, someone who wants the visual to be riveting, explosive and rich.”

Basically, Oleszko wants you to move past conventional social responses and see the world as a constantly churning kaleidoscope that includes the good, the bad, the ugly and the absurd. Her arresting, seemingly comic outfits, almost childlike on the surface, couldn’t be more adult.

The message is simple: stop, think about things the way things are, take it all in, and respond actively. She calls herself a jest-peddler, a subversive, an “irony-pumper,” someone determined to make her self-styled “intervenshuns” count.

Oleszko lives near Ground Zero on Manhattan’s lower eastside. We recently had lunch and discussed the state of psychic surrender that’s washed over many urban Americans since Trump’s election, an outcome that’s left New Yorkers in shock. Many want to tune out politics. Let the orange plague pass, they say.

But that’s isn’t the Oleszko way.

She still has strong memories of 9/11. It’s a physical memory as powerful now as it was 15 years ago. At the time, she volunteered relentlessly, trying to help those who needed it. She felt betrayed by those by the shocked thousands who lapsed into stunned silence.

Oleszko moves toward larger than life events, not away from them. She wants to explore their true meaning and uses her performances as a means to help people make sense of the unfathomable.

After the collapse of the twin towers Oleszko created a performance piece called “Rubble without Pause,” intended to illustrate the “curious humor of a fraught situation.” The idea was to shake people from their shocked doldrums. Again, the mantra was action and engagement.

So are many people, particularly in East Coast cities. But history should pass down at least one vital and instructive lesson. It should remind us that those who built the United States of America cared deeply about its future evolution, knowing it wouldn’t be easy. One look at the Constitution tells you these were thinking folk with no interest in lingering on the sidelines.

It’s a useful reminder for those who suffer from election fatigue, an understandable emotion given the squalor of the recent Trump-Clinton tussle. Ignorance can seem like bliss. Yet it’s bliss without a shelf life. At some point you have to wake up.

Oleszko and her quirky performances — “creating a ruckus,” she says — helps remind us that pondering what upsets us about world and choosing to respond collectively is a more powerful tool that falling back on personal outrage and the seclusion it suggests. Our collective humanity is what binds us. Which means looking at the world, taking in its provocations, and standing up to silence.