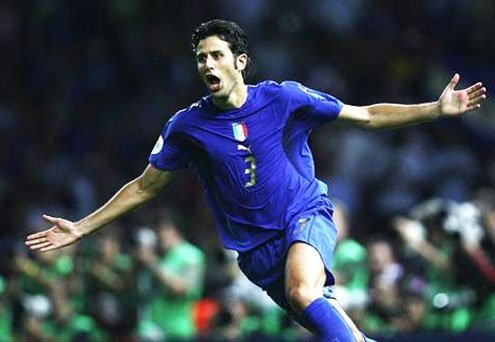 Fabio Grossi's remarkable goal against Germany during the 2006 World Cup, which sent Italy into the final, didn't assure a prosperous career. He is now without a team.
T

he demise of football stars happens more often and more swiftly than instant fame and the size of some salaries might suggest. Some of those who have fallen from grace in recent years would have booked a place on any Serie A “Who’s Who” list less than a decade ago. For a few of them, the applause is long gone.

Ricardo Quaresma: The hyped Portuguese winger, who played a pivotal role in helping Porto win three league titles in four seasons, was Jose Mourinho’s first signing as manager of Internazionale in 2008 in a player plus cash deal worth €18.6 million. Feared by fullbacks for his tricky wing-play, the former Sporting Lisbon and Barcelona player also claimed the Primeira Liga Player of the Year award in 2006. His first Inter match saw him execute a trivela, or curl, providing the assist to the winning goal against Catania.

But Quaresma would soon find first-team opportunities limited and was sent to Chelsea on loan for the second half of the season. Despite claims he’d regained his confidence at the south-London club, Quaresma seldom featured for Inter in their treble-winning year and was sold to Besiktas in 2010. His move to Turkey saw an upturn in fortunes, with increased playing time adding to his goal totals. But a March verbal spat with manager Carlos Carvalhal earned Quaresma an indefinite suspension that still stands.

Adrian Mutu: Adrian Mutu’s Serie A career spanned 12 years from his arrival at Inter in 2000 until relegated Cesena recently dispatched him to lowly Ajaccio in the French league. The Romanian striker will also be remembered for the 15 eventful months he spent at Chelsea in 2003-04. His spell at Stamford Bridge ended abruptly after failing a drug test for cocaine. Juventus swooped for Mutu’s services in January 2005, though his seven-month ban kept him out of action until the final game of that season.

Mutu struggled to make the desired impact in Turin and was sold to Fiorentina for €8 million the following summer. There, he was reunited with coach Cesare Prandelli, who had overseen Mutu’s rapid development at Parma, and his career seemed to soar. Prolific striking partnerships were formed with Luca Toni and later Alberto Gilardino as “the Viola” qualified for the UEFA Champions League in 2009. But Mutu would be embroiled in another doping scandal in January 2010 and was idle for another year. Mutu returned to some form last year, scoring eight goals for Cesena. But the club’s relegation led to the move to Ligue 1 club AC Ajaccio, where he has yet to find the back of the net.

Amantino Mancini: Another of Mourinho’s high-profile early signings (summer 2008), Mancini fell completely off the radar until hitting the headlines again for all the wrong reasons. In November 2011, a Milan judge convicted the Brazilian winger of a rape that occurred at a party held by compatriot Ronaldinho. He is now a year into a 32-month sentence. Mancini’s current plight is in stark contrast to his heady days at AS Roma. Signed for a nominal €1,000 fee from Venezia in 2003, then-Roma manager Fabio Capello stuck with Mancini notwithstanding an unconvincing start. Roma soon reaped the rewards, as the Brazilian scored with a deft back-heel flick to secure victory against Lazio in the derby.

When Roma qualified for the UEFA Champions League in 2006, Mancini showcased his undeniable talents on the European stage. His spectacular goal against Lyon was among the highlights of that year’s competition, as he bamboozled defender Anthony Réveillère with a series of step-overs before a thunderous finish, sending Roma into the quarterfinals. Mourinho took notice of further fine displays for Roma to bring him to Inter, where he endured a frustrating 18 months. After making little impact at archrivals AC Milan the following year, he was offloaded to hometown club Atlético Mineiro before the rape conviction that has all but ended his career.

Fabio Grosso: Italian left-back Grosso will forever be remembered for scoring the winning penalty in Italy’s shoot-out victory over France in the 2006 World Cup final, and the fabulous opening goal in the semi-final against host-nation Germany. His heroics earned him two national awards: the “golden collar” for sporting merit and the official order of merit from the Italian Republic. The Rome-born defender, who had already established himself as a force for Palermo, secured a transfer to Inter Milan after his impressive World Cup display.

But first-team opportunities at San Siro were limited, and the next summer Grosso was sold for €7.5 million to French giant Lyon, where he played an instrumental role in winning the Ligue 1 title and the domestic Coupe de France. Lyon also impressed in the UEFA Champions League, reaching the quarterfinals. Juventus swooped for Grosso’s services in 2009 and he played regularly in his first season. But Paolo De Ceglie displaced him a year later and never again regained a starting berth for any length of time. Juventus released him this summer and he remains without a club.