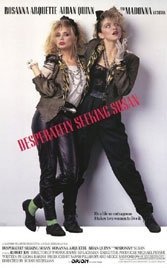 Among the better screwball comedies of the 1980s suffers at history’s hands. First, Madonna outgrew her pop stature, becoming an insufferable world-beater (and mediocre actress). Second, the personals section of newspapers fell from printed page into cyberspace, overhauling memories of another time.

Roberta’s amnesia, Egyptian earrings, and Susan’s manic propensity for ditzy connivance furnish a lively 1930s transplant. It’s curiosity killed the cat voyeurism minus the vulgarity. Says Roberta, wide-eyed: “They send messages through the personal ads, that’s how they hook up. Last year she was in Mexico City, then Los Angeles, now New York. Desperate. I love that word.” And into the rabbit hole she goes. Madonna’s best movie role.