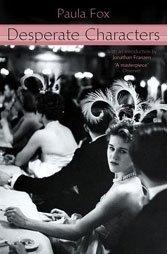 It all starts with a cat bite. Affluent, do-good Sophie Bentwood, a forty-something middle class Brooklyn housewife is determined to cut a feral cat a break. Life’s tough, she knows. A cat must eat. But husband Otto, a didactic, laissez faire lawyer, hates the cat and warns Sophie clear. The ensuing bite into a novel of copious and beautifully-rendered wounds. Before official mid-life crises, life coaches and anti-depressants were upscale marriages on the brink, tethered mostly by rage directed at the outside world, inevitably seen as in decay, or at the union itself, seen to reflect that decay.

Fox’s sad and scathing book story is both a 50-years-after-Gatsby snapshot of adult despair and an insider portrait of New York neighborhood life as the city began its slow descent into the dingy and bankrupt 1970s. Childless, intellectual Sophie wistfully rues a long-gone affair (she had wanted to get out of “edgeless and spongy life…”); Otto is in the midst of a breakup with his law partner Charlie (“He’s shit on our friendship…”); the couples’ Hamptons home is vandalized. Meantime, the cat bite festers. Is it rabid? (“… If I am rabid, am I equal to what is outside?”) Sophie dodges finding out, making the story swell, like the bite itself. Quiet chaos digs in its heels and Sophie grows wide-eyed. She broods and festers. So does Otto. Fox takes full advantage: “Ticking away at inside the carapace of ordinary life and its sketchy agreements was anarchy.”

This is more just than a portrait of 1960s affluence gone amiss. The wealthy civility and sensibility of the post-Depression generation is made as feral as the roaming cat, susceptible to “crawling, suppurating urban decay.” Desperation replaces optimism as a lease on life. The “slum people” are closing in. “I wish someone would tell me how I can live,” says Otto, reflecting on the literal and internal damage around him. Take Frank Capra cheer and turn it on end and you get where Fox is going. It’s ennui’s bloodshed perfectly presented.