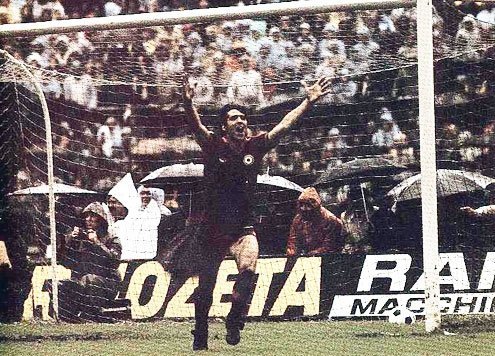 Maurizio Turone's goal, which might have won a key 1981 game for Roma, was disallowed.
S

eptember and October will see two of Italian football’s most intense and bitter rivalries, with AC Roma and Juventus of Turin squaring off in their traditional north-south fight, while Milan titans Inter Milan and AC Milan will also do battle. Here’s a look at their recent history.

Juventus-Roma, Sept. 29: Two sides with a long and controversial history. In recent decades their twice-a-season duels have often generated bitter cries from Roma fans, many convinced that Juventus receives preferential treatment from officials, particularly when playing in Turin.

Veterans of the rivalry recall the 1980-81 season, when iconic managers Giovanni Trapattoni of Juventus and Nils Liedholm of Roma went head-to-head in a late season game that many believed would decide the Serie A title. The Swede was looking to give Roma its first scudettoin 39 years and only its second ever, while “Trap” was set on winning Juventus’ 19th Serie A title. Juventus’ white-and-blacks (bianconeri) is Italy’s most decorated team.

The match ended in a discordant 0-0 draw. To this day, Roma supporters wrangle about Maurizio Turone’s disallowed goal (which insiders still dub il gol di Turone), after Juventus goalkeeper Dino Zoff appeared unable to stop a seemingly legitimate header from the Roma sweeper that a line judge ruled offside. The Turin club would go on to win its final two fixtures to claim its latest title, further fueling the north-south rivalry.

Michel Platini-led Juventus dominated in the following seasons, adding another three scudettos to their tally, though Liedholm did manage to guide Roma to its second-ever league title in 1983.

Zdenek Zeman’s arrival as Roma coach in 1997 opened up yet a new chapter of controversies (Zeman, now 65, has returned to coach Roma this year). The loquacious Czech famously accused Juventus superstars Gianluca Vialli and Alessandro Del Piero of steroid abuse. Juventus’ club doctor, Riccardo Agricola, was later convicted of supplying players with excessive quantities of pharmaceuticals, though an appeals court acquitted him halfway into his two-year prison sentence.

The fluid transfer of managers between the two teams — Fabio Capello, Luigi Delneri and Claudio Ranieri have all coached in both Rome and Turin at different times — only deepened the acrimony. News of Capello’s defection from Roma to Juventus in 2004 surprised observers and stunned Roma fans. He not only led Roma to its second Serie A title in 2001 but later voiced very public criticism of Juventus general manager Luciano Moggi’s relationship with player agents. Roma fans struggled to come to terms what was seen as a betrayal by the man who for five years had led them into battle against their financially well-endowed Turin adversary.

But Moggi would get his comeuppance. In 2006, he was the key figure in a vast match-fixing scandal that would eventually cost Juventus titles it earned under Capello in 2005 and 2006 as well as see the humiliating demotion of Italy’s most honored side, which was punitively forced into Serie B, the country’s second-tier league. Capello would move on to Real Madrid and later to coach England.

Rome has not defeated Juventus since the 2009-2010 campaign, when it finished second under Ranieri.

Zeman’s presence has only revived old bad blood between the two teams. Vialli, now a television broadcaster, recently said he’d never forgiven Zeman for his 1990s accusations. “He cast a shadow over my career and Del Piero’s and to this day he’s never apologized to me.”

AC Milan-Inter Milan, Oct. 7: The so-called “Derby della Madonnina,” named after the statue of the Virgin Mary that sits atop Milan’s iconic Duomo, is among the most high-profile derbies in world football. In Serie A, the two sides have crossed paths a remarkable 178 times, with another 114 matches in competitions such as the Coppa Italia and UEFA Champions League.

For a decade, Milan had only one club, the Milan Cricket and Football Club, founded in 1899 by English expatriates Herbert Kilpin and Alfred Edwards. But in 1908, a group of Italian and Swiss players, fed up by the overwhelming Italian predominance in the Milan side, created a breakaway club they named Internazionale in a bid to give foreigners equal opportunities to play.

Historically, class standing has also divided the two clubs, leading to the usage of derogatory terms to describe one another. At the start, Milan supporters, nicknamed casciavit (“screwdriver” in Milanese dialect), consisted largely of the city’s working class, while Inter fans, so-called bauscia, “braggers,” generally hailed from Milan’s well-to-do bourgeoisie.

Over time, the social differences narrowed to the point of inversion, at least at an ownership level. Inter, i nerazzurri, have long been run by center-left businessman Massimo Moratti (who made his fortune in oil), while Milan, i rossoneri, is firmly in the hands of former Italian Prime Minister Silvio Berlusconi, whose politics contrast with Moratti’s.

The longstanding rivalry between the sides hasn’t stopped a steady stream of player interchanges. Throughout his career (1909-1923), striker Aldo Cevenini famously switched from one side of the city to the other, enjoying two stints at Milan and three at Inter.

Other “exchange” players include high-scoring midfielder Enrico Candiani and the iconic Giuseppe Meazza, after whom the clubs’ shared ground (the San Siro) is officially named. Over the last decade, world-class players including Clarence Seedorf, Brazilian goal-machine Ronaldo and Swede Zlatan Ibrahimovic each had stints with both teams.

Things are no different these days. Italy star Antonio Cassano recently switched from Milan to Inter, while Giampaolo Pazzini went the other way, both on season-long loans. Much of the pre-match debate has been focused on two strikers, who, incidentally, formed a formidable strike-force duo at Sampdoria just two years ago.

Both players will be eager to put disappointing club campaigns behind them. Last year, Cassano was sidelined for seven months after a minor stroke while Pazzini’s faltering form led to his exclusion from Italy’s Euro 2012 squad.

Inter achieved a double victory in last season’s derbies, denting their arch-rival’s bid to defend their Serie A crown (eventually won by Juventus). With the Turin club looking as strong as ever, victory in the Milan derby will be crucial to both sides’ hopes of mounting a credible title challenge this year.